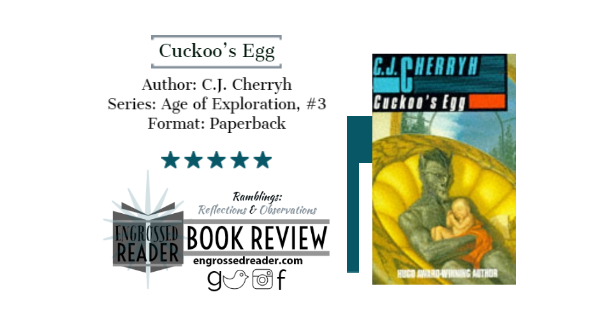 The cover for Cuckoo’s Egg is beautiful. It perfectly captures the essence of the book.  It shows Duun, cradling Thorn as a baby.  Between the artwork and back cover we already know it’s about an alien culture meeting human, however it’s the way it intersects, how the story is told which is very beautiful.

They named him Thorn. They told him he was of their people, although he was so different. He was ugly in their eyes, strange, sleek-skinned instead of furred, clawless, different. Yet he was of their power class: judge-warriors, the elite, the fighters, the defenders.

Thorn knew that his difference was somehow very important – but not important enough to prevent murderous conspiracies against him, against his protector, against his castle, and perhaps against the peace of the world. But when the crunch came, when Thorn finally learned what his true role in life was to be, that on him might hang the future of two worlds, then he had to stand alone to justify his very existence. Goodreads

Thorn is raised in isolation given the advantage of the upbringing of the revered warrior class (problem solvers) through in loco parentis by Duun- hatani,  This bildungsroman, coming of age story takes place in an alien world where humans are the difference – they are the alien to be feared.

“You have a need…Do you know it? Can you say it to me? “Not to be different”

The word love isn’t used often but gestures are everywhere and is evident throughout. Duun replicated his childhood for Thorn. In part to give an upbringing that wasn’t defined by differences, and also to nuture, to give a positive experience of growing and developing as a child.  Thorn had the benefits of one to one attention with a powerful leader of note who imparted his skills and abilities on his foster son.

Thorn’s upbringing takes up a significant portion of the story, this also neatly illustrates the them and us, human and alien difference. I had and have no issues with the pacing of this story. As Thorn knows more, is taught more, he surmises. Greater urgency is brought to bear on the quest he didn’t realise he was on.

“Someday you’ll be wise enough to solve problems. Until then, don’t create them.

But they can’t remain isolated for long and once they go to the city, they are right on track for destiny – because there has always been a plan for Thorn’s future.  They face political intrigue, treachery and puberty.  It is a thrilling read.

Cuckoo’s Egg has me welling up, on the verge of tears for what Thorn and Duun has been through and what the future holds.  It makes me question humanity, love and who to trust.

It is always 5 stars from me.

5 stars – It was Amazing