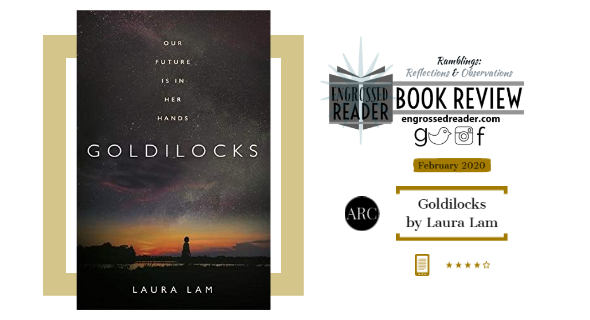 Superficially Goldilocks is about a journey, but ultimately, it’s about the fight for human life, freedom and the future of Earth.

Ravaged by environmental disaster, greed and oppression, our planet is in crisis. The future of humanity hangs in the balance – and one woman can tip it over.

Despite increasing restrictions on the freedoms of women on Earth, Valerie Black is spearheading the first all-female mission to a planet in the Goldilocks Zone, where conditions are just right for human habitation.

It’s humanity’s last hope for survival, and Naomi, Valerie’s surrogate daughter and the ship’s botanist, has been waiting her whole life for an opportunity like this – to step out of Valerie’s shadow and really make a difference.

But when things start going wrong on the ship, Naomi starts to suspect that someone on board is concealing a terrible secret – and realises time for life on Earth may be running out faster than they feared . . Goodreads

“It is horrible, terrible. I am not going to pretend it is not. They had their chances to fix things, and they did not. They knew what was at stake, but they still bought plastic, ate beef, took flights. I did, too. If I had been left behind, I would have died with them. But that is not my fate. It does not have to be yours. Think, Naomi. Valerie is making the hard decision, the impossible choice, so we do not have to.”

This book is topical, it is about Earth at the point where the prophesies we’re discussing here and now in 2020 have come to past. Climate change, displacement, refugees isn’t a topic for discussion or other places, it is affecting everyone directly, it can’t be avoided.  It is very real.

Goldilocks starts with a crew of five women who on the face of it steal a spaceship and go off to find the new planet that Earth is banking on to be habitable, so saving the remaining population.

Why appropriate the ship?

Earth is now almost a dystopian nightmare, the environment polluted, landmasses have been altered by climate change and the refugee crisis is overwhelming.  Concurrently the freedoms of women have been eroded.  Capable, experienced and talented women are being relegated to motherhood and excluded from the workplace and decision making.

“Everyone had grown used to giving orders to the pleasant-voiced feminine robots. Alexa, Siri, Sophia, Sage, do this for me. A perky ‘okay’, and your wish was her command. They’d all been doing it for years before women started realising the men in their lives had been conditioned to do the same to them. And by then it was too late.”

The government wouldn’t allow the women who built the ship to be the people who received public acknowledgment for their efforts or the accolades of finding the next home planet and saving the human race.

We are taken on a journey of quiet intensity as these women are faced with the knowledge of what they have done, why and the catastrophic consequences of their plans not being accomplished. The atmosphere of isolation on the small ship, insular relationships and interactions are exquisitely depicted conveyed.  As they travel farther away from Earth, the decisions made there seem ..almost irrelevant.

I don’t want to say much more as I came to this blind, having only read the synopsis and no reviews. I would like other readers to experience the awe and freshness of reading Goldilocks.  To tease out for themselves the themes of family dynamics, romantic relationships, population control within a gender imbalanced world.

Goldilocks begins relating the later life of one of the crew and everything that is unsaid makes it clear that something went wrong – not to plan – with the novel as the reveal to what extent.  We see through flashbacks at different time periods the dreams, plans, and realities of this mission.

I liked that it made me think about women’s rights from another angle and the parallels to environmental concerns. It seems odd to know that this review has little content about the plot itself, I haven’t relayed many details about the themes and barring the quotes, the women are nameless.  I feel as if I am compounding the ‘make women invisible’ stance But in truth, this is about all women, all people and acknowledging that their efforts are not in vain, unappreciated if nameless or unattributed.

If it’s not been made explicit from this review, then I will state it here: I loved reading Goldilocks, this thought-provoking book packed a Sci-Fi space journey punch.  It also made me consider how I could assist with small or big efforts in saving the world from human interference.

Finally, take it from me that the number of quotes indicates the depths that the themes resonated, my enjoyment of the writing and appreciation of the prevailing optimism.

It is comforting to conclude with the following:

The crew of the Atalanta were only five women out of all of humanity, but they could still found a whole new place for humans to flourish. Sometimes you only need one tiny proportion of the population to enact change.

Thank you NetGalley and Headline for a digital ARC in exchange for a candid review.