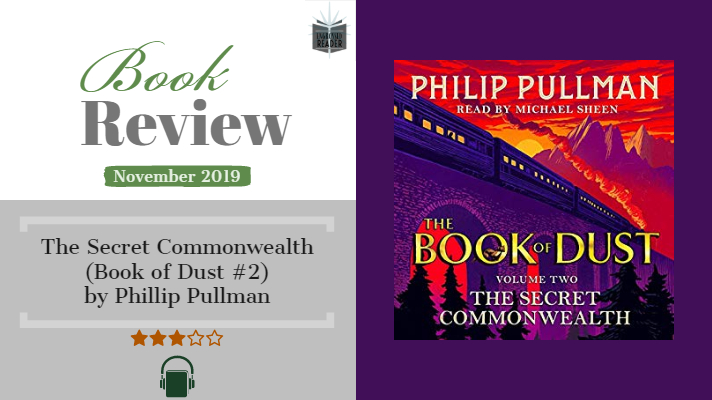 Please be advised that this review is spoiler ridden and they are not hidden. Please do not read if spoilers impact on your enjoyment of reading a book

I started reading this and was immediately drawn in.  Phillip Pullman has a way with words and setting a scene. I got to the end of Chapter 2 saddened, having realised that so much had already happened and I didn’t have anymore time that day to listen.

It is 20 years since the events of La Belle Sauvage: The Book of Dust Volume One unfolded and saw the baby Lyra Belacqua begin her life-changing journey.

It is seven years since listeners left Lyra and the love of her young life, Will Parry, on a park bench in Oxford’s Botanic Gardens at the end of the ground-breaking, best-selling His Dark Materials sequence.

Now, in The Secret Commonwealth, we meet Lyra Silvertongue. And she is no longer a child….

The second volume of Sir Philip Pullman’s The Book of Dust sees Lyra, now 20 years old, and her daemon Pantalaimon, forced to navigate their relationship in a way they could never have imagined, and drawn into the complex and dangerous factions of a world that they had no idea existed. Pulled along on his own journey too is Malcolm: once a boy with a boat and a mission to save a baby from the flood, now a man with a strong sense of duty and a desire to do what is right.

Theirs is a world at once familiar and extraordinary, and they must travel far beyond the edges of Oxford, across Europe and into Asia, in search for what is lost – a city haunted by daemons, a secret at the heart of a desert, and the mystery of the elusive Dust.

Before I dive straight into the review, I must firstly applaud Michael Sheen who narrated The Secret Commonwealth, it was a stupendous performance and I do mean performance. He gave life to each character with appropriate regional UK and international accents. Inflection, intent and motivation so clearly articulated. Just wonderful.

Whilst the narration was excellent, I believe I missed out on not being able to read certain passages for myself, eg  Johan & Roxana poem.  Though I have minor issues with having listened to the audiobook, my 3 star rating is based on the book itself. It cleverly combines current social, political and religious realities in this alternative Earth. It was beautifully written and thoroughly engaging but left me feeling empty afterwards despite what had been gained: greater insight into Lyra herself, the world around her and the tendrils which were reaching out to her. It felt like filler. Nothing substantial happened on this quest.

Innumerous events occurred, from the changing focus in Oxford to Lyra’s epic pursuit of Pantalaimon, truth and safety on a journey from West to East. Lots happened, many many characters came to share their insight and further the reader’s knowledge on Lyra’s past and future. But for all this dazzling array of cherished and new personalities, vivid environments, etc. I felt disengaged and uninvested.

Why does Lyra find some things crystal clear and others too vague to remember from the mists of time.

What I found concerning was the focus on Lyra’s sexuality, particularly with Malcolm Polstead, also her own introspection about her relationship with men and the type she favoured.

Malcolm’s yearning for Lyra is unseemly especially as it began when he was teaching her – when she was 16.  The power dynamic of the teacher pupil is well known and just because he didn’t act on it ..at the time isn’t okay.  The memory of leaning over her and smelling her hair is creepy. It s not acceptable. And it makes Lyra’s comment on the uneasiness between them all the more clumsy and distasteful.

It is as if in contrast to Gerard Bonneville who savagely took what he wanted without a care, Malcolm is restrained in his affection, doesn’t disclosure it directly to her and really it isn’t a bad thing because he is in ‘love’.  He’s so self controlled in this regard, that everyone can see it at once.

Plus there’s a nice parallel with a young girl, “Pauline,17 years old, pretty and shy and also in love with Malcolm” How could Malcolm’s desire for Lyra be  wrong when there are other young girls, similar age to Lyra who finds Malcolm attractive.

I don’t know where this is leading to but it doesn’t sound good.

Finding out Marcel Delamare was Lyra’s uncle explains a lot but raises other issues – his obsession with finding her, as evidenced by Olivier Bonneville using the alethiometer is… curious.  It’s already illustrated that he is a player of great strategic insight, so  why does he hold a blameless child responsible for her mother’s death and what will he do with her once she is captured.

The attempted rape of Lyra was shocking, surprised me but in hindsight true to life given the circumstances: she was travelling alone in a war zone without her daemon and that made her vulnerable in a way that far exceeded being female and alone.

In conclusion, losing Pantalaimon and almost tantalisingly having him in reach at the end of the journey, the arrival at The Blue Hotel is a good analogy for the whole book. It’s not what you expected and when it starts to feel like something is about to happen it ends.

I am looking forward to book 3 to get the answers to these questions and more.