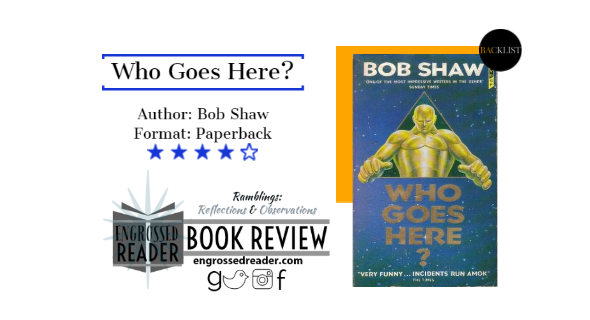 In the 24th century, men join the Space Legion to forget. A memory-erasing machine makes sure they do just that. The machine purges the memory of all traces of guilt, but for Legion recruit Warren Pearce it has wiped out everything. He must have had a very nasty past indeed – if only he could recall it. Into battle with the Legion, Warren faces vicious predators in fearsome conflict without the slightest idea why he’s been stupid enough to sign on in the first place! Goodreads

Who Goes Here? is funny, that has to be mentioned first.  Not that you wouldn’t have noticed as it permeates the whole book: the characters, dialogue and situations are humorous and well articulated.  But before you get the wrong idea, this isn’t a gagged filled romp with set pieces.

“Bitter experience had taught Peace that it was always when his fortunes appeared to be taking a turn for the better that disaster struck him yet another blow.”

Not too far in the future, Earth is on a relentless mission to promote its goods and services to the rest of the world through empire building.  This is facilitated by the Space Legion who seem to have an abundance of men who wish to join up for lifetime service to fight in multiple wars that last a couple of days or weeks.  The army is ill-equipped, run on a shoe string, led by inefficient officers or mindless glory hunters and manned by untrained recruits.  What could go wrong?

Add in time travel and you have me chuckling aloud to the various situations that Warren Peace find himself in.  Warren is a new recruit, who has joined the Space Legion to forget some traumatic memory or event, realises it’s not quite right for him and spends the book searching for his get out of indentured servitude clause.  This takes him from war to war on different worlds and in search of his past.

Who Goes Here? takes you on an exhilarating adventure with Warren Peace to fantastical and well realised worlds, where we meet new foes, hope to not lose any more comrades and find out more about Warren.

The science is believable and well integrated into the story, even the time machine is funny.  It is full of humour and cheerfulness, yet it doesn’t disguise the realisation that political machinations, materialism and even idiocy drive war.

Who Goes Here? did not disappoint.  I urge you to read for yourself to find out why it is a keeper and well deserving of a re-read.