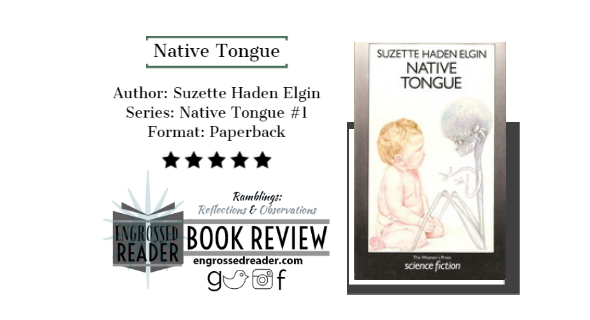 At times when reading Native Tongue, it is as if there is a heavy weight on my heart which refuses to move, I know my heart is beating but can’t feel it. I am numb throughout

Called “fascinating” by the New York Times upon its first publication in 1984, Native Tongue won wide critical praise and cult status, and has often been compared to the futurist fiction of Margaret Atwood. Set in the twenty-second century, the novel tells of a world where women are once again property, denied civil rights and banned from public life. Earth’s wealth depends on interplanetary commerce with alien races, and linguists–a small, clannish group of families–have become the ruling elite by controlling all interplanetary communication. Their women are used to breed perfect translators for all the galaxies’ languages.

Nazareth Chornyak, the most talented linguist of the family, is exhausted by her constant work translating for trade organizations, supervising the children’s language education, running the compound, and caring for the elderly men. She longs to retire to the Barren House, where women past childbearing age knit, chat, and wait to die. What Nazareth comes to discover is that a slow revolution is going on in the Barren Houses: there, word by word, women are creating a language of their own to free them from men’s control. Goodreads

This speculative future is foremost from the female perspective highly restrictive. To have nothing of yourself, to yourself unless it was allocated by a man is sobering to the reader given the relative freedoms both sexes are currently allowed.

But she felt no love for the man.  Loving someone who considered you only one small notch above a cleverly trained domestic animal, and made no secret – that is, loving any adult male – was not possible for her.

This oppression reaches unbearable levels for the women of the Lines. Those families who are superb linguists who communicate with aliens from different worlds, directly contributing to Earth’s economy.  These women are subjugated from birth to retirement.  They are not left in peace to just be.

But this is all that they know, this way of life, this way of living where women’s daily activity is prescribed from morning to night. Where the notion is a  good linguist is kept busy all the time and producing as many as eight children each to perpetuate the influence of the Lines.

Society raises men to see themselves as first with no equal.  Women’s feelings and thoughts are of no consideration, they do not matter. Women are commodities, less than human, a source of income and sexual release. Where even their body autonomy is controlled by men.

Why should a man have the decision making authority to decided whether breast reconstruction after cancer was a necessity or not?

The dismissive way women are perceived, spoken of and to permeates society at all levels:

Computer technician Lanky Pugh refuses to contemplate that a linguist female can excel at a  task that he struggles to complete himself – acquire a second language.

Thomas Chornyak, the family head of the Chornyak Household remonstrates his married daughter through mocking humiliation because of a sentence she uttered (confessing her affection for another male).

Nobody is angry with you. This isn’t worth our anger.  It’s just nonsense, foolish stupid nonsense, and evidence of how extraordinarily stupid you can be

After a series of similar such  humilations including an abusive marriage,

Nazaerth was never again to feel even the smallest stirring of affection, or even liking, for any male past toddling age.  Not even for her own sons.

My heart weeps for their plight, placating insufferable men to obtain a modicum of ease.

Charming! Just the kind of silly distinction a female would make, of course, but charming

Men on women’s speech and language

What saves the reader from despair

But there is a glimmer of hope,  joy even as  the women are downtrodden but not defeated. Hope lives in the secret work of a language of their own that fully describes the female experience, lead by those in the Barren House. The Barren House is the home for those who are old, no longer fertile or not considered useful, there women have limited free time and most importantly less direct oversight from men.  Solidarity is limited to this small group of women as the stakes are so high that slip up would lead to severe consequences and repercussions. It is decades in the making but they are purposeful in their attempts to have something made by women for women

Such a relief, to have a language with the right words in it!

Women on the benefits of Láadan

The abbreviated dictionary at the end of the book perfectly captures the concepts that I find useful, which there are no words for (that I know).  This gives me hope that the women continued to obscure their work, hide, deceive until the language was robust and fluent with all women of the Lines, to be cascaded further a field.

I’ve never read the sequel to Native Tongue and haven’t felt the need to do so until now – magical thinking has made believe that everything worked out for the best in that world – it all works fine . Yet now, I feel that I want to know the details of how that came to pass.  Onward in my search for book two The Judas Rose, book 2 in the trilogy.

Native Tongue is as I remembered: truly a book of terrible beauty. One that resonates long after being read and one that I can’t read too often despite the hope and resilience throughout.

5 stars – It was Amazing