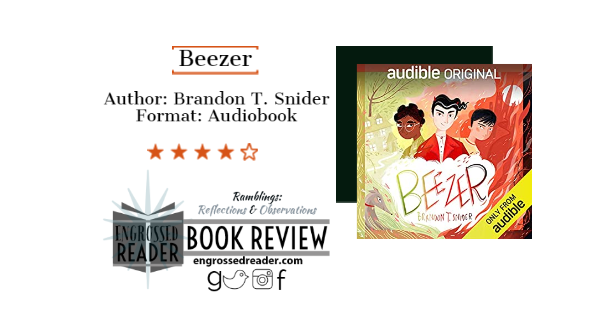 This audiobook was an excellent humourous short read, which was perfect to wind down into our weekend. I read it with Youngest (8) and Eldest (12) and both enjoyed too.

There are a few reviews on Audible.com which questioned the child friendly nature of the  plot but I think you have to know your audience.  Parents should know their children’s maturity level,  and whether they can differentiate fiction from fact.  Understand and be aware of their  emotional makeup and overall health and wellbeing,  Do they have vivid imaginations?  Do negative thoughts linger in their mind?  Is reality often confused with events that happen on tv or in film?

We are practising Christian, so the devil, evil and sin are issues that are mentioned and are a part of our everyday vocabulary, not trotted out only on religious holidays.  The kids have read a lot of mythology, the Bible, have  religious studies at school and are happy to ask questions if they don’t understand.    So given that’s our premise, I had no hesitation  listening together to follow the plot about the Evil One’s son on Earth.

A lovely coming-of-age tale of Beezer navigating the pre-teen angst of family, feelings, and friends. So what if he’s a demon? For ages nine and up.

Beelzebub, the prince of demons, is bored. It’s his destiny to one day rule the dark underworld known as the Red Realm, but it’s sooo boring down there. All he wants to do is lay around all day in the lava pits (ahhh), boss everyone around (rude!), and maybe play a cruel prank (or two). But Beelzebub’s father has had it with his son’s nasty attitude. No one talks back to the Red King. NO ONE.

#e2fbe6#e2fbe6A disgraced Beelzebub is banished by his father and cursed to spend his days in the worst place either of them can imagine: EARTH. Now Beezer (his new name… which he hates) has to navigate a family (way too nice for his liking) that doesn’t know the truth behind where he really came from. Oh, and his human body? Not a fan. Too many feelings! And it makes weird sounds.

What would Beezer do to get back home and reclaim his rightful place next to his father? Anything it takes. That is unless, he finds a new path (ugh, work)

Yet Beezer isn’t just about the devil’s son riding roughshod over humans, it’s about him coming to know humanity in a real way. His preconceived notions, base assumptions about Earth, humans and humanity are completely over turned.  Beelzebub, grows, develops and gains news skills; is able to self evaluate, to compare and contrast his life in the Red Realm (Hell) and on Earth.  Finally deciding what he wants his future to look like.

The story was simplistic, but all the better for it, as it left more time to focus on relationships and the key question: What is family? Is it by blood or those who you consciously choose.

Beelzebub was able to acknowledge that hell isn’t that great, even if your father is the big boss.  There were no special accommodations for the son of the leader and it was apparent if you don’t follow the rules you won’t go far there.

The human family in Beezer modelled correct, inclusive behaviour and language.  Showing that how we talk and behave with people matters and does influence feelings and opinions. We also see that you can change if you try and you are not defined by your origins or previous circumstances.  This is quite important given that this is a family made up  of adopted siblings and a single mother.

Thus the contrast of the (human) family dynamics  illustrating the attempts to blend to become a cohesive functional and loving family, showing the fun and games and then boundaries that shouldn’t be crossed especially with family, is touching and illuminating.

Finally at crunch time, Beelzebub has to make the decision about which place he best fits.

I liked the full cast and the dramatic sounds effect which were very vivid, almost surround sound in places.  Actors played their part well, capturing tone and emotion accurately.  Beelzebub’s developing character was particularly good – from the louche, idle princeling to the still occasionally arrogant, imperious but more aware and kinder teen.

Naturally, we are suckers for stories about Good versus Evil, especially well written ones.

We all liked the one liners, the demon possessed pet and Beelzebub’s attitude.  Do read this short, snappy tale about finding acceptance, family and a home.

My thanks to Audible who via Audible Stories has provided access to hundreds of books to keep children entertained whilst schools are closed.