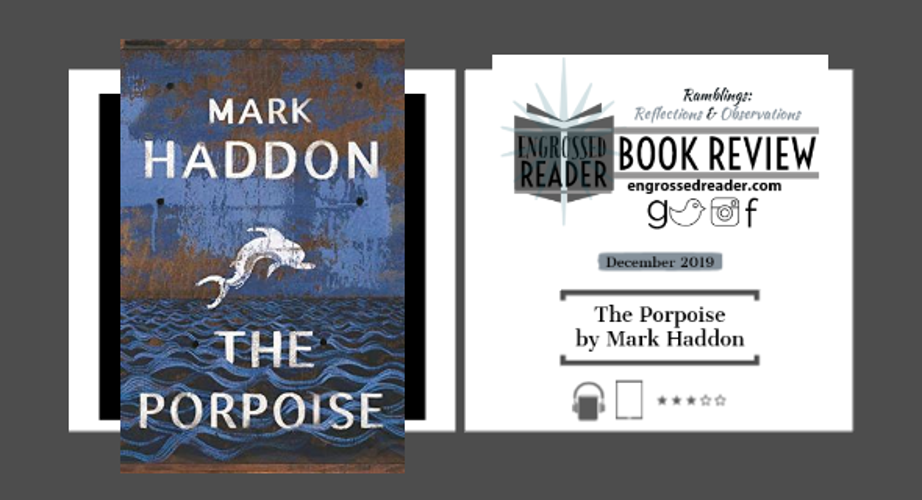 The Porpoise ended up being an odd read for me as I started off with the audiobook and was immediately immersed, enthralled in the story.  After the first 30 minutes or so I already had a few notes and naively thought the review would be straightforward.  Therefore, to be shortly stumped was surprising.

I was taken aback when it got to the mythical part, when the journey really began, I was utterly unable to understand it from that point as an audiobook.  Every other minute, thoughts were running through my mind:

What was going on?

Who was it happening to?

They were a few of my many questions. Suffice to say, it must have been a mental block because as soon as I had a written copy, I read the book from beginning to end in a couple of days.

I’m still at a loss for words, to sum up this book which is a rich, lyrical retelling of two Greek myths.  I am glad that I read it.  It fired up a lot of emotions which splintered within me: made me overall incredibly sad, angry in places –  justifiably I thought,  and weary from the hate, mistrust and humanity.  On reflection, I almost sound down on the book as if I didn’t appreciate having read it.  But I did because at the end despite the pain and misery interspersed throughout,  there were enough pockets of resilience, resistance and strength to make it worthwhile.

That said, I know that any review I provide – because weeks later, I still don’t have the words to convey why it resonated so much with me –  can’t  do justice to this tale about power, patriarchy, gendered roles and destiny. Why is it so often the case that events, life cycles are perpetuated? Why do people repeat rather than reinterpret or invent? Where are the innovators, the trailblazers?

In the end, I questioned whether this was myth, fantasy or Angelica’s defiance, I sincerely hoped it was the latter.

Recommended but not for the fainthearted.

Notes from the audiobook

I’d been up and around for an hour but hadn’t really noticed the fog until I closed the front door behind me having returned my gloves feeling the warmth and damp in the air.

The opening words were perfect, the synopsis had informed that the child was motherless but I hadn’t expected this start and the melancholy air was sublime.  The plane going into the fog as I myself was walking further into the mist was the first coincidence that morning.  It evoked such a feeling of sadness that I felt quite beside myself.

It almost became personal, as if these were my friends that I could feel justified in blaming: I didn’t want to start pointing fingers but immediately thought how inconsiderate of Maya leaving late, keeping an acquaintance waiting after obtaining the gift of free transport. And raged at Victor for being a bonehead, not wanting to look unskilled in front of someone he admired and fancied. Culminating in the sad conclusion of lives not lived to the full, those with potential cut off in their prime.

These characters were very well described.  Already I knew that the world accommodated Maya for her beauty and wealth.  This was her normal and not even an expectation from her. I understood these flawed people who wanted to portray their most impressive accomplishments to the world.  Eventually, leading to a lapse in judgment, poor evaluation of the situation and the loss of life of three people, not to mention a motherless daughter.

I was almost at the start of this tale, sad for Phillipe who was inconsolable at the loss of his wife. But it immediately became evident that his reaction to the loss was far too extreme, unhealthy and excessive.

Once back home, I paused on the book as it couldn’t do battle with the radio and chatter in the background. In the kitchen after sorting the dog’s feet from a muddy walk, whilst washing my hands. I hear a cover of Donna Summer ‘I Feel Love’ on BBC Radio London.  Coincidence number 2 – Herve is a big fan of 70’s disco.

That’s was it for me, I thought, I’m now hooked. It almost feels like fate, that I should be reading this here and now. And looked forward to the next session.

After coming to a standstill when reading the audiobook, I reflected on what I’d read so far: disgusted, sadden, incensed and considered whether I should go.  To do so would mean to actively go further into this murky world. And by finding another format of this book.  Except I realised that I didn’t have a choice.  Could I really sincerely leave Angelica like this: unfinished, left on a whim with no resolution to her tale.

To paraphrase the book ‘” would mean one knows and does nothing” friends on the reclusive life of Phillipe. People suspect but don’t want to:  get involved, know the details,  be caught up in an investigation.  No one wants to contemplate that they know someone who could behave in such a despicable fashion, acting with impunity.  Thus they averted their eyes and slipped further away from the association.

I couldn’t join them, and leave without the hope, the realisation that there was better out there for Angelica than this harrowing situation, thus I continued.  It was wrought but worth it.