Review – Orphans of the Tide by Struan Murray 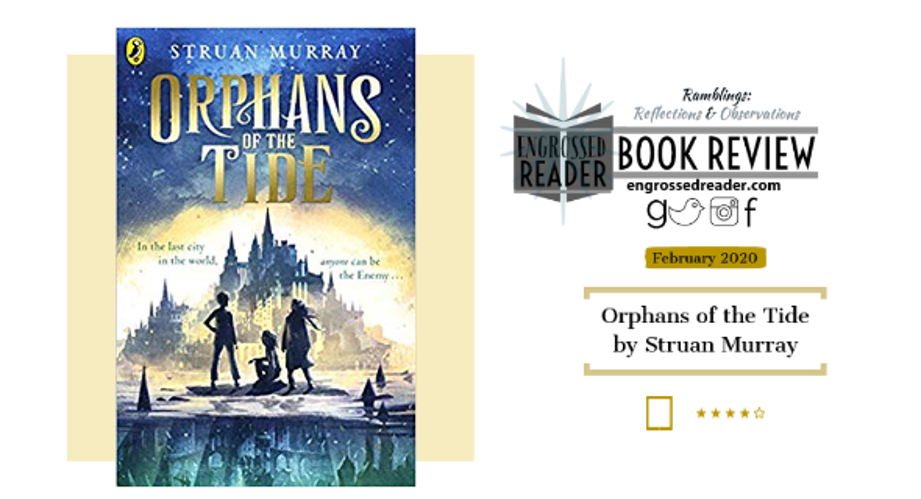 Orphans of the Tide is a fantastic tale about history, loss, friendship and love. It takes place in a  bleak land almost devoid of joy, where the inhabitants are focused only on survival,  a place mired in mystery: this is The City.  Where strange things happen because they always have and only a few remember or know the truth of the matter.

The City was built on a sharp mountain that jutted improbably from the sea, and the sea kept trying to claim it back. That grey morning, once the tide had retreated, a whale was found on a rooftop.

When a mysterious boy washes in with the tide, the citizens believe he’s the Enemy – the god who drowned the world – come again to cause untold chaos.

Only Ellie, a fearless young inventor living in a workshop crammed with curiosities, believes he’s innocent.

But the Enemy can take possession of any human body and the ruthless Inquisition are determined to destroy it forever.

To save the boy, Ellie must prove who he really is – even if that means revealing her own dangerous secret . . Goodreads

We are introduced to

The plot centres on three orphans, Ellie is following with mixed success in the footsteps of her late mother, an inventor.  Anna, Ellie’s closet friend who lives in the local orphanage, is also her assistant and the ringleader for the other orphans in the town. The story start when they meet Seth, the boy who arrives in the body of a dying whale.  Seth is deemed the Enemy a being that destroys, the Enemy is always hunted to death or destruction.

The City is a very strange place, which reflects its inhabitants, isolated and insular.

The people here live in a curious state of low lying terror of the Enemy.

A most unsettling place where people are fearful and suspicious of each other.

There is little trust and few instances of love, the watchful search for the Enemy is paramount and all consuming. The strain of worry, suspicion and fear adds to the blanket atmosphere of imminent death as seen in the ebb and flow of the tide.

What follows is a tale, filled with half truths, sorrow and desperation.  The children are forced to confront and defy the authorities, in their efforts to find out more about the Enemy and the truth of Seth’s origins. Friendship and loyalty are tested. Struan Murray conveys all these themes and emotions so very well.

I was enthralled by this book and the journey that it took me on. Though the children remain in The City, it is about a voyage of self discovery, hope and truth.  The story is atmospheric, the characters disarming and dialogue witty in places.

‘N-now listen, I have many p-powerful friends, ‘he stuttered furiously.

‘Are any of them Inquisitors?’ said Hargrath.

‘Then you have no powerful friends.’

This exchange sums up the power of the hierarchy in the City and is just one indication of the pithy writing. There are dark themes in this novel, but they are not overwhelming and do not distract from a book which at the heart is about friends working together.  I would recommend for children 10+.

It was paced perfectly with action scenes, followed by discovery and insight. And though I was sad when it ended I wasn’t disappointed, there was a sense of contentment. Because ultimately the conclusion felt right – it was true to the characters and the plot. What a lovely book.  I hope to read more about these orphans and this world soon.

My thanks to NetGalley, Penguin Random House UK Children’s and Puffin for an advance review copy in exchange for a candid review.

There were a few minor issues with this edition which I would hope are rectified before publication so as not to distract from this great story. They were a  few missing words, missing letters ‘ff’, the map at the start of the book was skewed, showing partially over a number of pages.   The illustration of the The City used as chapter headers were blurry and indistinct.