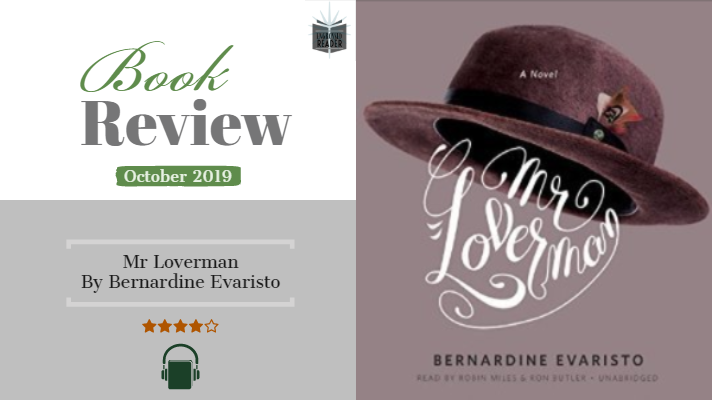 It is impossible to say the things I want to without sharing spoilers in this review.  I have hidden what I consider to be spoilers, but please do not read if spoilers impact on your enjoyment of a book.

FYI, I’m usually ok with spoilers but concede in this instance, that certain revelations in this book would have lost their impact if known beforehand.

The blurb for Mr Loverman blew me away. I read it and thought, “do I want to read this – it feels like it will be heart breaking”.  And it was, but in a good way. It made me reflective and consider the relationships of the older generations in my family and wider network.

The narration of Mr Loverman was perfect: inflection in accents was done well, attitudes and motivations came through flawlessly.  The story’s twists and turns and character revelations resulted in me taking notes after first gasping aloud, or holding my breath in trepidation, amazement, or feeling misplaced shame.

I went through a lot of emotions reading Mr Loverman which culminated in a steam of consciousness that I will try to shape into a review. I wrote a lot – too much even, so it is best I try to be succinct otherwise I will be overlong.

The first word I wrote was ‘bittersweet‘.

The first sentence I wrote was ‘Contempt is one of the death knells of a marriage‘.

And as much as I cram words into this book review, my first impression as summarised above remain true to me after finishing the book.   The story tugged at my heart strings. While wrapped up neatly at the end – there really weren’t any winners in this story as the book synopsis (taken from Goodreads) infers.

Barrington Jedidiah Walker.
Barry to his friends.
Trouble to his wife.

He is a husband, father and grandfather.

And for the past sixty years, he has been in a relationship with his childhood friend and soulmate, Morris.

Wife Carmel knows Barry has been cheating on her, but little does she know what is really going on. When their marriage goes into meltdown, Barrington has big choices to make.

Barry is convivial, everyone’s friend, the life and soul of the party, an erudite, dapper older gentleman. At face value, on the surface he’s a good husband, father, friend and business man. But this veneer masks the scared pretender who is desperate to keep his secret from public knowledge, from having family and friends know who he really is.  It’s not just his sexuality, he hides, it’s his recklessness, promiscuity and fear.

This anxious motivation has shaped him from a boy and drives his interaction with the world. Barry is a proud, strutting peacock who wants the best of both worlds – the respect of his peers and the love of his soulmate.

As much as I smiled at his jokes and laughed at his witty, pithy pronouncements, I couldn’t quite like Barry because for all of his intelligence,  intellect, and lively personality, was a man who failed and I would say wilfully rather than obliviously, to truly comprehend those around him – those he loved, tolerated and ignored.

Barry was like this with Carmel and Morris, in fact all his interactions are characterised by this level of assumption and misunderstanding of others. I would hypothesise that his theatrical slant (a personality trait but also a consequence of performing a role all his life), lead to him being an actor, observer of life and just a tad disconnected from those around him. Which is saddening on reflection, as others in similar circumstances did not present in this way.

As much as I understood his character which was well rounded and realistic down to the cadence, my aversion to Barry was based on his personality which I found inherently unlikeable . He is articulate and learned but prodigiously selfish totally wanting things his own way.

What resonated most was how unkind he was to Carmel.  He knew she loved him; knew he couldn’t love her but didn’t have the decency to be kind.  I understand the motivations of homosexuals who hid in marriages in that period – to save their lives – but at the very least Barry could have been considerate.  His unkindness was uncalled for and callous. What was the cost or effort for him to expend consideration?

My observation was Barry deemed marriage as a tick box exercise which allayed his fears, so put no effort into developing the relationship.  It was as if Carmel was a cipher, who represented the role of wife, there was no thought beyond that.  She was to work around his needs, wants and desires, provide him with a comfortable domestic life as he continued to live as a single man with an irritating appendage at home  – his trusting beard. He knew the harm he caused by his inattention, but it was easily shrugged off as a consequence of the desire to conceal his sexual orientation.

For all his bluster and self-congratulation about stepping up when Carmel had post-natal depression after the birth of both of their children, Barry never really comprehended that’s what expected from a husband and a father. His first thought was what would people think and second not sharing his private/ family issues with others. Given that Barry’s benchmark was that he stayed in the relationship when other husbands and fathers left, after the going got tough, it is not surprising it made him internalise that his actions went beyond the minimum.

Barry believed himself to be a good husband and father because he was never going to leave.  He was going to stick it out by hook or by crook.  It appeared as if he was happy for his marriage to remain prison like where he reported to his cell with Carmel as the warden.

You’ve got to sacrifice yourself for your marriage

There is the prevailing idea expressed and inferred from both Barry and Carmel that the institution of marriage was sacrosanct.  Dissolution of the marriage wasn’t even an option.

If that was the case, it is inexplicable that neither worked on developing the relationship more, to one which they could both accept.  Carmel and Barry looked at each other as if they couldn’t fathom how their marriage got to this state, when they both played their part.

Whilst I haven’t delved as deeply into Carmel’s character she too isn’t without blame.

I was shocked but thrilled that she’d had an affair ‘those five years were the best of her life’ and whilst she gave valid reasons for not leaving with that partner.

It did open up her eyes to desire, love and respect and illustrate that those were achievable for her, she wasn’t defective and there was something wrong with her relationship and marriage with Barry.

I’m not entirely sure how likely Carmel could be this oblivious yet it’s not beyond the realms of possibility when she was a newlywed.

But later, she was aware that men could find her desirable and she could feel desire during sex, having experienced a positive sexual relationship. This was a stark contrast to the lack of affection on her marriage and the absence of love or sex in her marital bed.

She knew something was wrong but assumed in her naivety that Barry’s sin was multiple women rather than an altogether different inclination, even though in hindsight there were clear signs and indications towards the truth.

Barry mocked Carmel’s obliviousness and her frumpiness but relied on that for his security – living within their community, parenting his children on a daily basis.  He didn’t even want to move away from the area when Morris suggested it, his comfort zone was too precious for him.

Unforgiveness is the poison you drink every day, hoping the other person will die

Barry put everything into his relationship with Morris: the four types of Greek love, that nothing was left for Carmel apart from co-parenting.  They shared a house – it wasn’t a home  – and little else.

Morris wasn’t as rounded and as detailed as other featured in Mr Loverman, but the little we found out about him, let you know that he was strong and decent when required.  Morris was the counterpoint to show that there were different types of gay black men of that generation and their difference was based on their personality not sexual orientation.

One who could get over a blow (wife finds him in bed with Barry), faces his fears (exposure) and remain in his community as a divorced man.

And there I’ll stop, otherwise I will be unable to.

Bernardine Evaristo wrapped up the plot lines nicely: a little too twee but answered all the outstanding questions that I was thinking of.

Even Barry is redeemed.

As if once with the one he loved, in a good relationship, Barry was able to evolve and be aware of those around him and their feelings and motivations.

I hope that I was able to adequately convey my sentiments on this beautiful depiction of an universal human trait: the lies we tell to feel better about ourselves. It was a masterful insight into a realised person and wider community, truly a great read on so many levels.