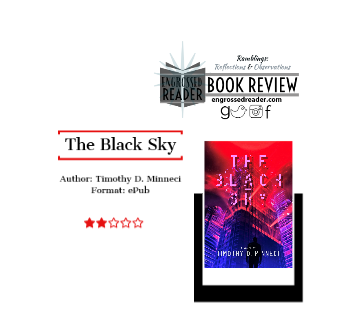 Set in a dangerous post-apocalyptic, near-future Manhattan, THE BLACK SKY tells the gripping story of a group of survivors, some living in a lawless wasteland, others safely inside a walled city, caught in the ticking clock adventure of an extraordinary mission to save one man, unlock the truth of humanity’s near extinction, and risk it all to save the ones they love – a thrilling debut novel that illuminates the power of family, survival against all odds, and hope in dark times. Goodreads

The Black Sky is all about US and THEM – the have and have nots. Those currently scrimping to survive in the lawless remnants of destroyed cities and the relatively fortunate who are behind new walled cities.  The majority struggling to pay their Citizenship debt or eke out a living whilst the elite remain in their high rises, comfortably oblivious to the downtrodden.

The story starts with Bishop who gets offered the opportunity to take on a dangerous mission in return for fast tracking his wife into Manhattan.   He takes the job because it would mean days and not years before he saw Tessa his wife after several years apart. On the surface it’s a straightforward job of collecting  a doctor from another town and returning with him alive.  What makes it nigh impossible is the short timeline, the treacherous  nature of travel and the fact that those who attempted this job have never returned.

The story switches between points of view so we gain an understanding of the different environments in this post apocalyptic world.  We see Bishop’s frustrations with working day and night to earn the money to buy his wife’s ticket to safety and his desperation in taking on a job with a slim to none chance of survival.  Tessa is portrayed as a resourceful strong woman who only has herself to rely on.  And we are also introduced to a number of different company executives who are vying for power, including some paper thin would be villains.

I wanted to like The Black Sky but it sucked the joy out reading it and any other book for several weeks. I find it difficult to give up on a book and sometimes that is more of a curse than blessing.

It’s not that it’s a bad book – there were  good ideas just not conveyed well.  Resulting in a series of notes and highlights that got increasingly critical. I should in hindsight have stopped reading after the lead character defaulted to smirking as his go to response.

This really is a one star read but because there were some ok ideas has been generously bumped it up to two stars.