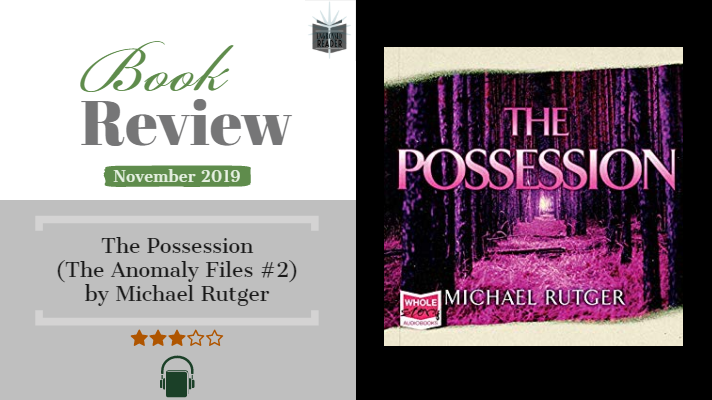 Around half way/ two thirds in, I really started to enjoy myself reading The Anomaly and was glad  that it had been subtitled book one.  Which brings me to The Possession,  book two in  The Anomaly Files series.  I had downloaded straight away, with only a break between both books  to make another cup of tea –  Cranberry and Raspberry – just in case you were wondering.  I got ready to continue the journey and  start on another adventure with Nolan Moore and team.

Still recovering from the shocking revelations they uncovered deep in uncharted territory in the Grand Canyon, American myth and legend investigator Nolan Moore and his team take on a new mission, investigating a rumoured case of witchcraft and possession.

Nolan hopes their new case, in a quaint village in the middle of the woods, will prove much more like those he and his team investigated prior to their trip to Kincaid’s cavern. But as the residents accounts of strange phenomena add up, Nolan and company begin to suspect something all too real and dangerous may be at play. A force that may not be willing to let them escape the village unscathed. Goodreads blurb

Not that kind of shock

Immediately, I’m on the backfoot because it starts with Christie, Nolan’s ex wife trying to solve the disappearance of a missing high school student.  Shortly thereafter, Nolan, Ken, Molly and Pierre appear and their next show idea coincidentally seems to meet up in the same town as Christie’s investigation. After that, the story rapidly becomes more mysterious as time goes on, with people behaving strangely, odd happenings and it becoming  more and more difficult to know what is real and what isn’t.

I liked that we got to know more back story and prominent parts on some of the team. Nolan’s knowledge of a variety of subjects is astounding.  His general knowledge and specific knowledge on ‘way out there stuff’ is top notch. It’s believable and not just because a lot of this information is stored or bookmarked on his phone.  It’s his demeanour even down to the recollection of the material.  That said, I’m not sure if in real life, he would be that annoying type of guy,  getting on your nerves after awhile oversharing information that you might or might not be interested in. Because he doesn’t act like a know it all…but there is that possibility.

Again, I am finding it tricky to give a fulsome review without spoilers so let me be vague once more.  The Possession is the definition of creepy: with different realities, town secrets and weird occurrences.  This book made me look up the definition of paranormal and supernatural and realise that both applied.

I didn’t enjoy The Possession as much as The Anomaly for a few reasons which are really just are niggly issues for me.  I preferred the narration in The Anomaly, Ken’s voice especially was discordant .  The story wasn’t as engaging, so I listened to it less frequently and therefore found it even more difficult pick up where I’d left off the previous day and to establish where I was – if  in the here and now.  That is no criticism of the plot, which was interesting and believable given, on the surface, it is way out there but can be distilled to family and inheritance but the different realities were hard to keep up with via an audiobook.

What was unintended but perhaps a bonus or spooky depending on your opinion, on more than one occasion, whenever it got particularly eerie, I could be found walking the dog before sunrise through woodland – that level of atmospheric I could have done without.