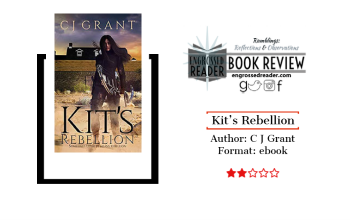 The synopsis for Kit’s Rebellion by C. J. Grant indicated that it would cover some of my favourite genres dystopia, zombies, and post-apocalyptic.

The year is 2043. Flesh-eating monsters are real, militia duty begins at sixteen, and the contenders in the fight ring are the new rock stars of the world. Twenty-year-old Kit O’Brien grew up as an orphan in a survivor camp, fighting alongside the militia to keep the last of humanity alive. But as the final vestiges of the infected die out, bloodthirsty raiders soon become a bigger threat – and while the militia’s attention is diverted outside, Kit discovers something much worse lurking within the walls of their camp.

As the camp’s governor descends into madness, those in the fight ring are forced to kill each other for the entertainment of the crowd. Kit soon finds herself at the center of his circus, fighting for her life against those who used to be her friends. Things only get worse when she uncovers a dark secret – someone is breeding new crops of zombies.

With the future of the camp resting on her shoulders, Kit must stay alive long enough to unmask the one behind this new threat. If she fails, she won’t just lose her home, but her life. If you like fast-paced post-apocalyptic fiction with a dash of action and mystery, then you won’t want to miss this page-turning novel GoodReads

However, the synopsis I later found out once I stared reading the book was  pretty much in the style of movie trailers which are way too long; highlight the wittiest dialogue, amazing chase/fight scene, etc essentially giving away the best bits.  Those types of trailers leave me empty, disappointed there isn’t more to the movie and confused why there’s a 90 minute film with extraneous details when the plot  was summed up perfectly in a 3 minute trailer.

Kit’s Rebellion reminds me of that unfortunate trend.

There was nothing more to the story, the layers and depths that could have been revealed in an enticing, engaging way were already exposed, signposted on huge billboards. This could have been redeemed with intriguing characters and great dialogue but regrettably wasn’t to be.

I liked the idea of Kit’s Rebellion, the world that was portrayed but sincerely didn’t like the execution.  The characters were stilted, flat, without significant detail and I kept on hearing Kit’s interior voice which was exasperating.  Subvocalisation isn’t the right word but that word eludes me right now.

What it seemed to me was that I was reading the outline of the plot with character building and motivation, what hadn’t occurred effectively yet was translating that into the nuanced construct that is a novel – show not tell.

I appreciate that my views are in a minority as reviews on GoodReads are all 4 and 5 stars, but I’ve got to be honest in my opinion otherwise, what is the point. All that notwithstanding, it was an inoffensive read, likeable but not as much as I’d anticipated.

Thank you to BookSirens and the author for a digital review copy in exchange for a candid review.