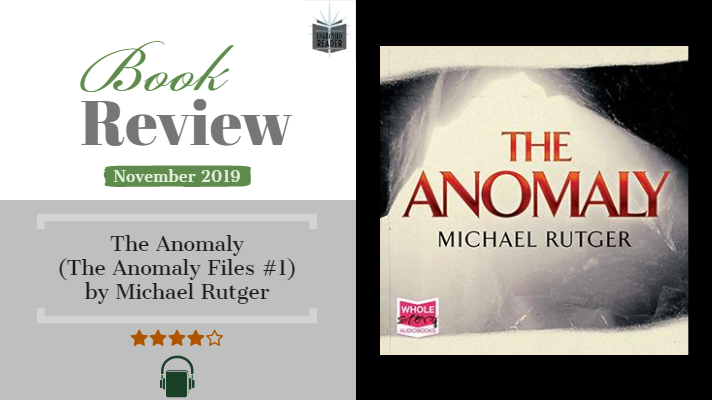 I was pleasantly surprised by how much I enjoyed this Indiana Jones/ Tomb Raider style tale. The Anomaly is a good read elevated to great by the excellent dialogue, the mystery itself, plot twists and reveals that I was too oblivious to follow.

Not all secrets are meant to be found.

If Indiana Jones lived in the X-Files era, he might bear at least a passing resemblance to Nolan Moore — a rogue archaeologist hosting a documentary series derisively dismissed by the “real” experts, but beloved of conspiracy theorists.

Nolan sets out to retrace the steps of an explorer from 1909 who claimed to have discovered a mysterious cavern high up in the ancient rock of the Grand Canyon. And, for once, he may have actually found what he seeks. Then the trip takes a nasty turn, and the cave begins turning against them in mysterious ways.

Nolan’s story becomes one of survival against seemingly impossible odds. The only way out is to answer a series of intriguing questions: What is this strange cave? How has it remained hidden for so long? And what secret does it conceal that made its last visitors attempt to seal it forever? Goodreads summary

The narration was good, a little let down by the non American accents: the British accent was wobbly and the South African came across as Australian but at least it made the characters distinctive to my ears.

This book is a combination of myth and mystery and I liked it from the start because of the lead: Nolan Moore, a down on his luck adventurer/YouTube presenter.  I liked Nolan, the way he was effortless on camera – made the YouTube show sound so watchable – but also his honesty – he knew himself.

The Anomaly was  filled with dialogue, great dialogue at that.  You got a good sense of who people were through conversations. There was  real insight into each character’s personality and motivations and not always through introspection.

I am finding it difficult to review without spoilers and I’m not going to give any spoilers as I enjoyed it immensely without and would hope that everyone was afforded that same pleasure.  So this review will be brief and vague.

What I really liked

I started to really like this book when things started to go wrong for the group, culminating with them trapped in the cave.  That’s when it decided to get eerie, creepy and claustrophobic. It comes close in parts to a riveting page turner, having you on edge the whole time watching for clues know that it’s a life and death situation.  Knowing that missing any detail is going to be the deciding factor on whether you make it out of the cave alive.  Self reliance on modern technology is stripped away, back to core values and necessities: , food, drink, safety.

Though some may not believe the premise, you have to acknowledge that something is happening – it is real.  It makes you consider that if we are uninformed, if we  don’t know current events, history, fable and myth, we are unprepared and will suffer consequences.

I felt like this book told me that I could never be a detective. I saw the clues but I didn’t add them up.  And spent more than one occasion saying ‘duh, how did I miss that’.  In retrospect, everything was laid out . You just had to be observant.

I had planned on spending 30 minutes each day on the morning dog walk to read (listen) to this book at my leisure but the plot and pace didn’t allow for that.  It swept me up like a gentle tidal wave and kept on drawing me in multiple times a day even when the pace was slower and there was nothing actively happening.  My brain was speeding on knowing that there were clues out there and I had best start paying attention.

I am so pleased with this book that  I immediately downloaded the next book in the series. Am looking forward to what happens next with Nolan and the team.