Catch Up: The Pause 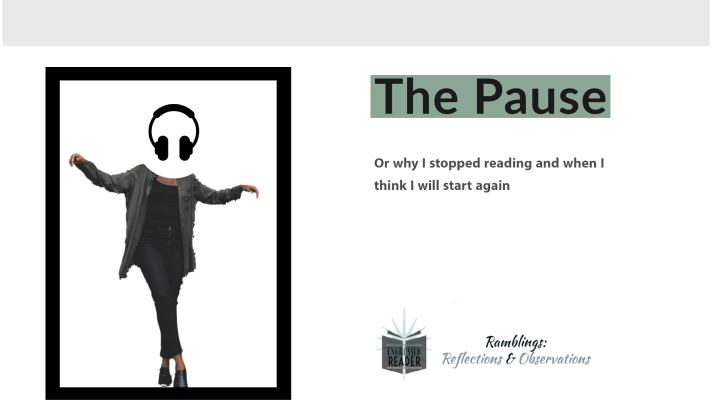 I started this blog in October 2019 as an attempt to get reading again after years drifting by reading a handful of books and bemoaning that fact.

Between October and December 2019, I read according to my Goodreads stats 47 books which was remarkable for me, given the previous nine months I had probably only read 5 or so. So I took that to mean, I could read a lot more the following year.

As we approached March/April 2020 and the pandemic started to really take hold my reading began to wind down.  I didn’t notice until June that I was really struggling to read.  It didn’t matter if it was a hardback, Kindle book, library eBook or audiobook on my phone, I just couldn’t find the will or obtain any enjoyment when I occasionally did read.  I was inattentive and couldn’t focus on anything meaningful for too long.

The last book I finished was on July 18th, my attempt to jump start my interest.  It was a re-read of a classic romance and whilst enjoyable that joy didn’t translate into a need to read other books on my TBR (to be read list) or those on the physical and kindle bookshelf.

Concurrently, I was in the middle of four other books that I gradually stopped picking up. Audiobooks were paused and never resumed.  Painfully, library reservations came and went.  These were all good books that I had wanted to read, some that had been reserved because I was desperate to read and had really looked forward to but somehow now when the opportunity was here, the desire was gone.

‘Life’ had gotten in the way

Looking back now I can see that naively in my mind, I’d believed that whatever was going on globally, nationally, locally, when translated to my personal and work life, etc wasn’t really affecting me.

I got reduced to the essentials, the functional aspects of existence leaving no scope or inclination for extracurricular activities. Reading and writing unfortunately fell into the black hole of things I couldn’t do anymore.

So, what did I do with my time?

Honestly, I can’t remember the details for most of what I did in my down time.  I can safely say I watched some tv.  But what stood out was music.  I reverted back to music which began to soundtrack my days and being cocooned in that bubble really helped. Sometimes it was the lyrics and other times it was being drowned in sound. Being in the three minutes or whatever the duration of the song was a task I could commit to and still take pleasure in.

Music fulfils many roles for me primarily as a source of joy and connection but also a fall back, a crutch. It connects me to the moments; the times I’ve heard the song before and when I’m hearing it now.  Conversely, it can take me away from the present and invigorate me for the future.

What did I listen to?

I went back to my roots with a hint of new. In alphabetical order below is the list of the songs/albums that got heavy repeat. Links are to my standout tracks (for albums).

Disclaimer there are many others that filled the gap too that are not listed or included as a video.  Apologies as that would make this list enormous.

I took my inertia and created

August was different in that music had an accompaniment, being supplemented by a new hobby

It took me into a whirlwind of obsession that has only in the last few weeks abated.   Every moment that I wasn’t doing the things that need to be done, was spent focused on this   It was the oddest sensation to know that my free time was spent above and beyond what was going on in the here and now.

What I loved was it allowed me to create my own narrative in a mindful way. It took me out of the melancholy that was slowly creeping, insidious like a vine. Only becoming apparent when detrimentally it began to muzzle thoughts and words.

Time wasted? No, rather time diverted, leaving me energised.

To conclude I went off on a real tangent, learnt a lot of new information on the topic at hand and returned to a field of creativity that I hadn’t realised I’d lost.

Writing this post now, with a smile on my face I am already looking on this tiny portion of the hellmouth period with fondness.  It has sharpened my research skills, got me searching/enjoying my music back catalogue and put feelgood back into my every day.

Have I got my mojo back?  Well I’m still not where I was in earlier in the year, but I can at least see me getting there.  I’m hopeful – that I will start reading regularly soon – and that is a vast improvement.

And to finish where we started…

104 books was a modest goal set in January – to read two books per week, a laughably achievable aim then, yet now there is a quiet confidence that might still be achievable. And even if it is not…it’s not the end of the world.

Yesterday, I read 7% so my hope isn’t without merit.