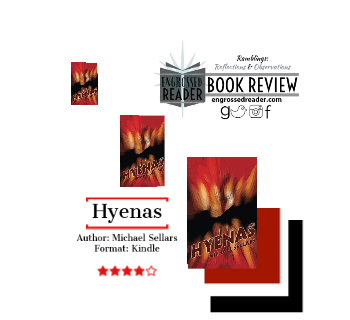 Five months ago, the apocalyptic ‘Jolt’ turned the majority of humankind into the atavistic savages 27-year-old Jay Garvey calls ‘Hyenas’ on account of their insane, shrieking laughter.

A terrified Jay is tempted from his bolthole in a Liverpool book shop when he learns the whereabouts of the only boat that hasn’t been scuttled by the deranged militia leader known as Sergeant Pepper.

As a brutal winter closes in, Jay, and the small band of survivors he collects along the way, must avoid death and capture to take advantage of this single, slim window of escape. Goodreads

Hyenas is a subtle book. Yes it does have zombies, gore and terror aplenty, nevertheless there is this  low hum which vibrates throughout with restrained intensity that gives this book unexpected depths.

To expand on this point further would mean revealing plot points. Which I am loathed to do, knowing it would fundamentally ruin the story.  This has to be a spoiler free review, so you are given the opportunity to enjoy this book as much as I did.   Suffice to say, there is a very good reason why Jay, our hero is hunkered down in a Liverpool book shop after the Jolt (end of the world as he knew it) occurred.

In Hyenas, they can not.  By cunning intellect and sheer numbers, zombies are at the top of the food chain with humans as their prey.  This  truly is a battle of wits, brawn and luck that save the survivors – (individuals or in groups) to fight on and endure another battle on their escape from the city.  Jay isn’t the only survivor and to further complicate matters there are human groups who are at odds with each other about how to address the crisis, which of course adds to the tension.

The level of tension is kept high as the reader is thrust front and centre along with Jay and his merry band as they dart from place to place to avoid a gruesome death from the undead or conscription in a zombie resistance army.  My heart was in my mouth due to the relentless pace, coupled with the evidence of the rapid eradication of society, made it painful to watch.  This is a visual book and would be awesome as a movie.

The characters were interesting and varied. Humans were normal people caught up in a tragedy of epic proportions. Flawlessly exhibiting the expected internal reflection and strain with one another. The zombie characters were intelligent and purposeful. The prose lovely, lyrical and amusing in places, the dialogue realistic,  and the depiction of Liverpool vivid.  Hyenas sold the city to me.

What also worked particularly well was  Jay’s backstory and how it was told in flashback. The thread of sadness throughout illustrating all that was lost in the Jolt was poignant. These tender moments from memory,  paused the present –  which was bloody carnage, – added value then sent the reader hurtling back to  flight or flight in the now.

Hyenas was the perfect blend of creepy and terrifying.  Taking a well worn genre, twisted it, and delivering on an interesting premise.  It scared the heck out of me in the most enjoyable of ways.