Book Brief – The Poison of War by Jennifer Leeper 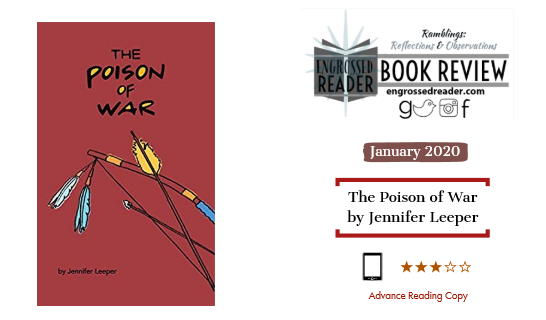 This short story tells the story of two murders that occur on a reservation in Arizona, USA. The cast list is small and so it’s clear that one of the few people met or referenced has committed the deed.

Two Mexican drug smugglers are murdered on Native American soil and the only clues left behind are two single arrowheads in this compelling page-turner of tribal secrets and distrust at the border.

When detective Frank Silva of the Tohono O’odham Nation arrived at the scene of the crime he immediately feared his investigation would require him to turn inward–to his own people–in search of the killer.

A complex web of lies, love and intrigue in the heart of the reservation pulls readers into a place and time in limbo straddling the U.S.-Mexican border which is struggling to retain its heritage and independence. Two maverick detectives form an intriguing team trusting each other with not only their lives, but with the fate of the Tohono O’odham Nation in the crime mystery.

The Poison of War, from award-winning author Jennifer Leeper, highlights the Tohono O’odham reservation’s evolving struggle against Mexican cartels and their friction with border agents who hold the line stretching across the middle of the reservation.

The novella’s setting of the American Southwest, particularly on a Native American reservation, and the style and cultural background of the detective protagonist draw resemblances to Tony Hillerman’s works including Dance Hall of the Dead and The Blessing Way.

For fans of Leeper’s work and fortuitous newcomers, The Poison of War is a stunning tale that highlights timely issues of the U.S.-Mexico border, immigration, drug trafficking and the reservation culture of the Tohono O’odham tribe. Goodreads

The author skillfully reveals the mystery in an unembellished manner.  Resulting in the feeling that I knew the people, their environment and cared about their concerns.   The turn of phrases were apt, bareboned and evocative.

I enjoyed the restrained, dogged police work to uncover alibis and motivations. And whilst it was a short story I felt it covered everything;  it has the depth and breadth of a full-length novel.

The Poison of War is as much about the murders, as it is about reservation life and the threat of Mexican cartels.  The impact of change, circumstance, and this age of distractions and competing priorities are starkly shown on the Tohono O’odham Nation way of life.

My thanks to Netgalley and Presna Press for providing a copy post -publication date in return for a candid review.