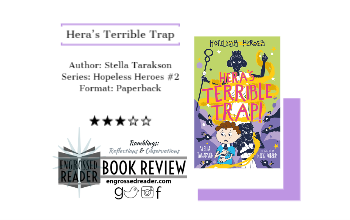 Tim Baker thinks his adventures are over until he hitches a ride to Ancient Greece on a stolen vase. Soon Tim finds himself trapped with an army of peacocks and a hero who can’t stop admiring himself.
Put that mirror down, Theseus!

Thank the gods his new friend Zoe is there to help. Just don’t tell her dad…

Hera’s Terrible Trap follows on immediately after Here Comes Hercules!  Which is perhaps a good thing as it keeps the momentum going and you don’t have to start wondering what heroes get up to when they’re not on adventures.

To cut a long story short, the mysterious vase from Book One has through part enigmatic means and Hermes trying to steal it, transported Tim to ancient Greece.

Tim keeps his cool and fortuitously his wits about him as he goes on another journey with Hopeless Heroes.

This time however, Hercules takes a backseat in this adventure and it’s his daughter Zoe, with the help of a self-involved Theseus that helps Tim to outsmart Hera and retrieve the magic vase.

This is another enjoyable tale with such fun personalities, each with attributes that help and sometimes hinder in the quest: Theseus is vain and self-absorbed, Zoe intrepid and resourceful, Perseus skillful and knowledgeable despite his retirement.

We and Tim come to the realisation that heroes are not all their cracked up to be, sometimes their reputations don’t accurately represent who they really are and when push comes to shove, you’ve got to try yourself.

If you’ve ever wondered what Medusa’s (the Gorgon’s) sister was like, are interested in how to successfully escape a maze and would like to know how to best peacocks then this is the book for you.

My thanks to Netgalley and Sweet Cherry Publishing for a copy of the book in exchange for a candid review.