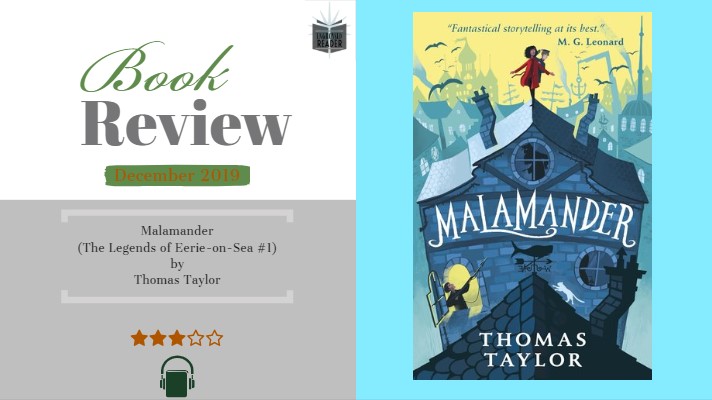 Series: The Legends of Eerie-on-Sea, #1

I liked this mystery which followed two children – almost orphans  – on the search for the mysterious Malamander – a fearsome sea creature which is sighted in Eerie-on-Sea .

Nobody visits Eerie-on-Sea in the winter. Especially not when darkness falls and the wind howls around Maw Rocks and the wreck of the battleship Leviathan, where even now some swear they have seen the unctuous malamander creep…

Herbert Lemon, Lost-and-Founder at the Grand Nautilus Hotel, knows that returning lost things to their rightful owners is not easy – especially when the lost thing is not a thing at all, but a girl. No one knows what happened to Violet Parma’s parents twelve years ago, and when she engages Herbie to help her find them, the pair discover that their disappearance might have something to do with the legendary sea-monster, the Malamander. Eerie-on-Sea has always been a mysteriously chilling place, where strange stories seem to wash up. And it just got stranger. Goodreads

Eerie-on-Sea is revealed to be a wonderful place  – thought I’m not sure that I want to live there, but would be extremely happy to visit –  which is filled with peculiar happenings and strange wondrous everyday things, that the inhabitants take for granted.

What I wouldn’t give for a book dispensary and a Mermonkey providing me with the book I needed rather than wanted. Or a talking cat.

Herbie and Violet were capable detectives for their age, investigating and finding clues in search of her missing parents. However were the unluckiest of children to always be getting caught by adults where they shouldn’t be. I found them to be like real children:  equal parts irritating and charming.

What made me chuckle the most

The character I warmed to the most was Lady Kraken, the owner of Grand Nautilus Hotel. When she called Herbie a dunderhead and a number of other insults, is my favourite moment. I was walking the dog and laughed long and loud, uncaring of stares.

My only minor query would be

Sebastian Eels Calling Peter a snowflake. Mainly because it brought me out of the moment to think, was it meant in the current mocking way to describe millennials, and if so was it apt? Or was it a literal comparison to a snowflake: beautiful, inconvenient and transient and if so why use that term

This was a light frothy read which presented as a straightforward mystery, yet was that and more. Leaving me with unanswered questions which I’m hoping will be revealed in book two.

This was narrated by the actor Alfie Allen, who was thoroughly pleasant. Hopefully he will be onboard for book two – Gargantis due out 7/5/2020.

Suitable (in my opinion) for ages 8 and above