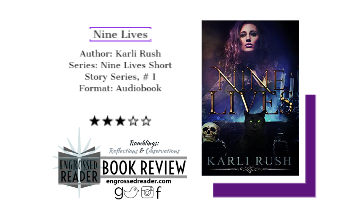 Trixie is a feline of a unique sort. She’s hustled the streets of the Big Easy many times but never quite like this. Trixie finds that when in New Orleans, Hoodoo is much more than a tourist shop full of souvenirs. Reality has never been stranger and the stakes are much higher than ever before. See how this sexy feline takes on every challenge thrown at her and in the process discovers that there’s more to life than meets the eye.

The synopsis for Nine Lives was vague enough that I wanted to know more to find out if it was worth my while.  It was. Trixie is a woman, now a cat because she messed with the wrong family by stepping out with a married man.  Trixie gets adopted by a single parent and finds that she’s also picked up the inquisitive nature of her new species, which leads to her investigating the neighbours.  To say anything more would give away the plot and that would be a shame as being a short read, there is not much time to develop layers.

I admired Trixie for her honesty – being turned into a cat, gave her a reality check.  She sounded pretty unlikable (to me) when ruminating on what got her turned into a cat and I am sure in part, was what drove her to be a wandering cat, trying to right a wrong.

The things we dislike most in others are the characteristics we like least in ourselves.

I felt the story was a little simplistic and characters not as well developed as they could have.  For the life of me I couldn’t understand the oblivious natures of some of the characters but let it slide as it helped to achieve a satisfying conclusion.  That said I do want to find out more about Trixie’s adventures and if she will ever get turned back into a human.

The narration was good, though I thought it sounded echoey in places, even on headphones and via speaker.  The variation in voices was fair, though for some inexplicable reason expected a stronger regional accent.