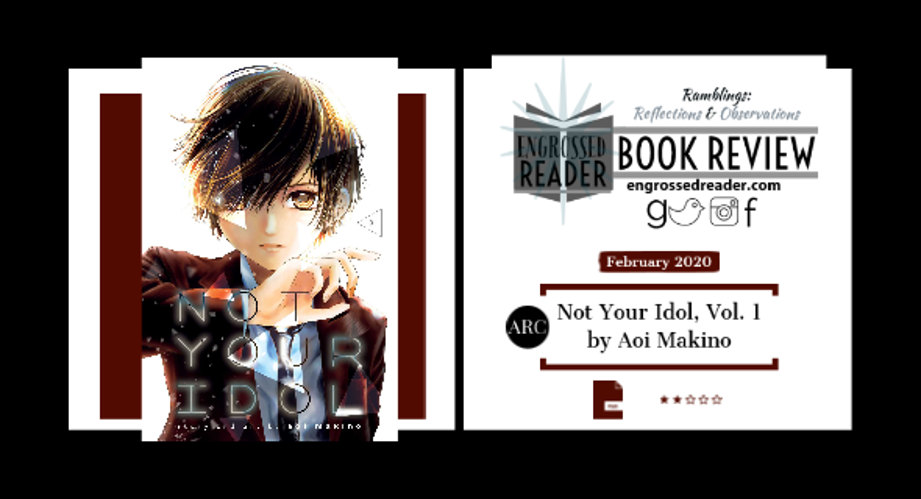 I haven’t read manga in a very long time but once in a while will catch up with a graphic novel. So what I’m obscurely trying to say in a roundabout way is  I’m not sure if the theme in Not Your Idol Vol 1 is standard now,  topical or an outlier.

A psychological suspense series about a girl who has given up her life as an idol after being assaulted by a fan.

After that day, she stopped being a girl. In the wake of an assault, Nina Kamiyama, a former idol in the group Pure Club, shuns her femininity and starts dressing as a boy. At high school, she keeps to herself, but fellow student Hikaru Horiuchi realizes who she is. What secrets is she keeping? The shocking drama starts. Goodreads

Kamiyama is deeply affected by this assault, which has led to her leaving the idol group and reinvented herself by changing her name and adopting a non-feminine presentation at school.  I would even go so far as to say is broken by this incident as she’s retreated into the background in this new environment, hasn’t made any friends at school, lives alone and doesn’t appear to be moving on or processing this traumatic event.   The impression given is she must deny her femininity to feel safe, to be safe.  It is almost if she believes that only men have the luxury of safety at all times.

It’s not likable but it’s appreciated that the conversation can be had about sexual assault, stalking, stereotypes, gender expectations. In this instance, assaulted by a guy who wasn’t caught, finding out that she is being stalked, makes Kamiyama’s behaviour even more tense and erratic – verbally lashing out or walking off when being spoken to. The affects of the assault is clear, she is traumatised: it has turned Karen from a fun-loving idol into reclusive Kamiyama who stands out for all the wrong reasons.

What I don’t get

Given all that has happened to Kamiyama and her age, why is she living by herself.  Where is her family in this? Where is her support network?  I don’t class daily phone call from Pure Club as sufficient to help someone recover from PTSD.  That is very odd to me, so much so that I see it as a plot device which is irksome.

Hiraku is supposed to be the good guy, so why is he following Kamiyama, questioning her and asking for an autograph.  If as stated, he understands the wider context of sexual assault and it’s behavioural changes, then why does he act the way he does around her? What is this saying about his character arc?

I’m not sure what the driver is for this story. Is it about the life of an idol and the sacrifices that it entails?.  We are shown the benefits and limitations of this life – being told what to do and say,

Having to deny your emotions, individuality and embrace what’s best for the group to survive and thrive.  No part of your life is off-limits.   To acknowledge and accept that your value is primarily as a commodity to the fans and the sponsors.

Is it a critique of this form of celebrity and the stereotypes that it enforces regarding attractiveness, clothing choices and the perception it influences others and the general objectification of young girls?   We see the latter through the conversations of the boys and girls at school.

Or is it about surviving; what does the aftermath of assaults look like for victims, sexual or otherwise, particularly when there is no resolution or justice?

Having come to the end, I’m kind of unsettled as it’s not clear, there are no conclusions or revelations. I feel unfulfilled.

To finish off, the drawing style was okay but marred by the large watermark through the centre of each page which was distracting and some of the lettering was too small.  Additionally, it was really irritating to read with  Adobe Digital Edition, as it didn’t work on my phone so I was limited to reading on the PC.   Finally,  flashback scenes were hit and miss.

Thus in summary, this first installment is not as intriguing as I expected it to be.  I kind of want to find out more about the perpetrator and the cliff hanger that Vol 1 ended on, but am in no rush to prioritise doing so.

My thanks to NetGalley and VIZ Media for an advance copy of this book in exchange for a candid review.