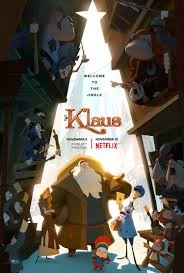 This animated tale set in the North brings us the magic of Christmas in the format of an origin story.

The plot centres on a spoilt rich boy, whose father is in charge of the postal network. Jesper is indolent and lazy. Only concerned with silk sheets and his every whim being catered for. His father tires of his lack of ambition, gives him an ultimatum – set up a postal service on a remote island or be disinherited.

This is the motivation that Jesper needs to excel and grow.

Smeerensburg is a town  built on resentment and spite, going back so far in history that the two embittered clan leaders don’t know the original reason for the dispute. The adults are surly, argumentative and battle hardened. The children spiteful and mean spirited.

Jesper works hard to succeed (the silk sheets are a good incentive) and we are shown that one act of goodwill sparks another; through his interactions with the children, letter writing, his friendship with the toymaker Klaus, the whole town begins to transform for the better.  We see a return to civility, kindness, consideration and genuine neighborliness.

To say anymore would give away the fine details that make it endearing. It’s wholesome, heart warming and not too preachy with its message.

The spirit and magic of Christmas is revealed and it is very sweet.  Didn’t tear me up, but there was a twinkle in my eye.

The animation is good and the voice acting fine. When I heard Norm Macdonald’s voice uttering sly digs and saw his character’s machinations, I knew we would be for a treat.

Suitable for small and big kids alike, though teens might sigh and think their too cool for it…there not.