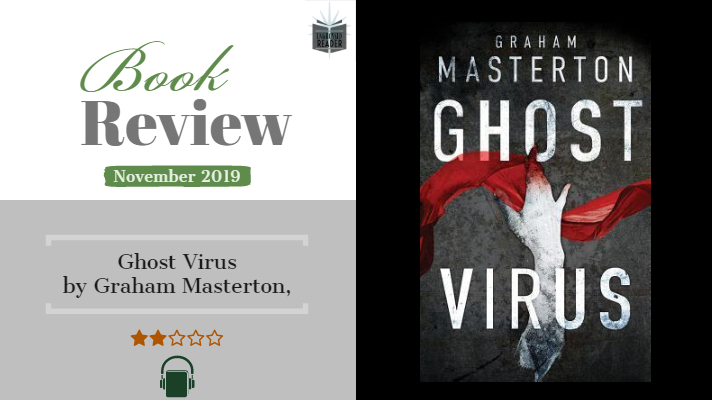 Ghost Virus, starts off with a gruesome suicide which is distressing in the extreme, the author gets right into the mind of Samira, who chooses to kill herself via acid.  It is shocking and after reading it I thought ‘ horror is one of my go to genres, but this scene has started right at the max, where can it go from here and will I be able to keep up?’.

Poor choice of word to follow, however fortunately, we move on to the investigation of this incident and the plot, slowly begins to pick up the pace.

The girl had been staring into her mirror all morning before she picked up the small bottle of sulphuric acid and poured it over her forehead.

Samira was a young woman with her whole life ahead of her. What could have brought her to this? DC Jerry Pardoe and DS Jamila Patel of Tooting Police suspect it’s suicide. But then a meek husband kills his wife, and the headteacher of the local school throws her pupils out of a window. It’s no longer a random outbreak of horrific crimes. It’s a deadly virus. And it’s spreading. Somehow, ordinary Londoners are being infected with an insatiable lust to murder. All of the killers were wearing second-hand clothes. Could these garments be possessed by some supernatural force?

The death count is multiplying. Now Jerry and Jamila must defeat the ghost virus, before they are all infected…

Ghost Virus  is a book of two halves, well technically thirds.  The first third when we endure through multiple deaths is intriguing until you get fed up.  I end up questioning how heartless I can be given these deaths – grisly yet inventive – are leaving me cold because there are just too many of them and the visceral impact is lost.

The second third gradually kicks in when it becomes evident to the Met Police  that there is a  malevolent force or forces which is using individuals who are tired, unhappy in life and forcing them to seek retribution against those they deem responsible for their plight, controlling them through apparel.

The final third is tedious and overlong: the attempt to ramp up the tension and horror with repetitive set pieces,  inane conversations and marauding clothes is mind numbing.  Again I got to the point where I became oblivious to the deaths despite them being detailed, vivid and stomach churning.

On face value, the plot is ridiculous.  To paraphrase DI Saunders engaging with a raincoat, hysterical with rage “it’s clothes for fuck sake”

“How can we arrest second hand clothes” DC Jerry Pardoe

The plot was fine until it went unhinged.  It started off logical given the premise but added another dimension which was supposed to escalate the tension and horror but actually just turned me off.  At this stage, the pacing also  went to pot.

Don’t get me wrong, I found the plot believable and I don’t think that I’m gullible, although naturally I would say that.  But that point aside, I can take on board ghosts or spirits possessing clothes, so much so that it has completely put me off secondhand clothes for life.  Not going to throw away any that I already have but never, ever going to buy again.

I could nitpick about a number of issues in this book foremost, how long did it take for the police to see what was going on before admitting to  what was playing out in front of them.  It is likely that this is an accurate replica of what would happen in real life but, it just took what seemed to be an inordinately long time.

There was a number of innovative ways of clothes killing people but eventually the deaths became exhausting , each subsequent death ramps up the slaughter with detailed gore of bones, organs and guts. I simply wanted to get to the end of the book and find out why this was happening.

The final third made me almost regret pushing through to the end. It was excruciating, the denouement underwhelming. It took me a minute to absorb what I had heard and conclude that this is ‘it’. This is the reason why I’ve spent hours listening to Ghost Virus.

But to end on a high note, I did like the London setting, some of the horror and the narration was brilliant, a real highlight.  I clocked all the regional London accents which were distinctive and fairly accurate.