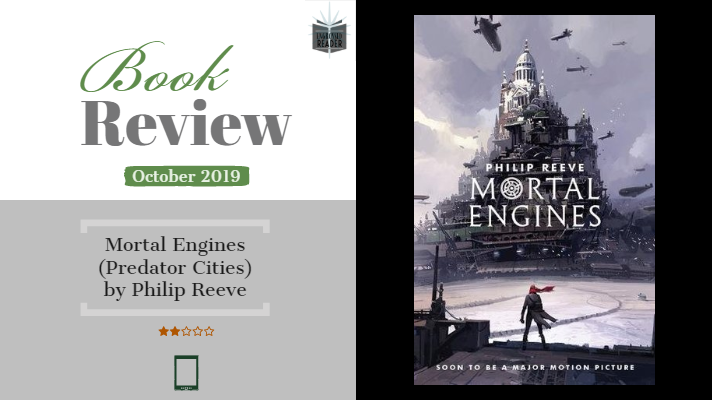 “It was a dark, blustery afternoon in spring, and the city of London was chasing a small mining town across the dried-out bed of the old North Sea.”

The great traction city London has been skulking in the hills to avoid the bigger, faster, hungrier cities loose in the Great Hunting Ground. But now, the sinister plans of Lord Mayor Mangus Crome can finally unfold (abbreviated Goodreads blurb)

This ebook was reserved from the library clearly some time ago as it was a total surprise when Mortal Engines downloaded to my phone a few days ago. My guess is I ordered it, when I saw the film/dvd trailer in 2018 or maybe 2019 and then promptly forgot.  I do recollect at the time, how surprised I was that the film was based on a book, which bafflingly I’d never heard of. Given I liked the premise -steampunkesque –  I knew, I should really read it and see the movie too.

I guess if I’d seen the film in the intervening period, it’s unlikely that I would also have read the book, but here we are.

Despite the fact that I had four books already in this month to be read pile, I prioritised Mortal Engines primarily because it was an elibrary book with automatic return after three weeks AND two other users were on the waiting list .  Who knew when I’d get the chance to read it again given how popular it was! Secondly, I can never say no to young adult/ speed read.

I used a 30 minute lie on the subsequent Sunday morning to get the book started, thus enabling me to have read enough to be able to pick it up whenever I next had a spare moment. After reading around 100 pages I was truly ambivalent about continuing.

Can we make a detour?

As you’re aware, I hate not finishing a book.  There must be a time constraint or it’s too awful to continue with before I abandon reading material.  Mortal Engines doesn’t neatly fit into anyone of those categories.  Consequently, later that afternoon, I plodded on and can’t say that I enjoyed the experience.  The feeling of disengagement persisted.

I wanted to like Mortal Engines  but the characters were flat, irritating, whiny and idiotic so often, it was maddening. One dimensional, bland and inoffensive; I didn’t even have the consolation of them being unlikeable.

The philosophy of Municipal Darwinism was interesting but not developed enough for my liking, that really was all that kept me reading. Nor too the world building of Traction Cities which was what originally had drawn me in.

It had all the elements to be great but was ultimately unfulfilling.

And that is the greatest disappointment – the execution was poor, such a missed opportunity.

Too often, I’m caught up in a new world/engaged with the plot and trying to cram ‘just a few more pages’ into the minutes I have left before I’m off to the next scheduled task or event.   That wasn’t a consideration with Mortal Engines, whilst reading, my mind was consistently elsewhere.  I had to consciously keep on reminding myself ‘I am reading a book – FOCUS!’

It should have been easy to ignore the tv and chatter in the background, it’s not like Come Dine With Me repeats on More 4 are riveting. I sped read the remainder.

I was looking forward to revelling in this new world, instead, the reality was speed reading with a scowl on my face.

I can’t put my finger on it exactly, as it seems to be a number of reasons why I couldn’t enjoy it, one being the writing style was odd, jarring in parts.

But my biggest issue was – in my opinion – the plot, characters and tone seemed calculated in its approach: ticking off the boxes to make it appealing to the masses or as a cinematic retelling and underwhelming me as a consequence:

“Dog lay with his head on his paws, his eyes darting from his mistress to Valentine and back.  He had never seen them fight before, and he hated it.”

I found it to be analogous, much in the same vein as producing a standard cake with all the expected ingredients: flour, sugar, eggs, butter, etc.  Yet, in this case, despite having a recipe, it was evident that two key ingredients were missing:

1. The leavening agent (writing style) instead of producing a light airy cake that was lovely and moreish to eat leaving you satisfied but wanting more, I was presented with a crispy, flat, tough invention that whilst edible was not inviting.

2. A flavouring or spice (characters).  There was no distinctiveness to the offering, resulting in a bland product that I’d never choose again given the range of similar items .

The absence of both culminated in  me choking down the smallest morsel for the sake of politeness, bemused at the attempt, incredulous at how badly it deviated from a tried and tested formula and determined to avoid again at all cost.

I had a much longer review sketched out, several scribbled sentences as paragraph starters, with numerous quotes highlighting and supporting my reasons for this downbeat review but in hindsight thought: