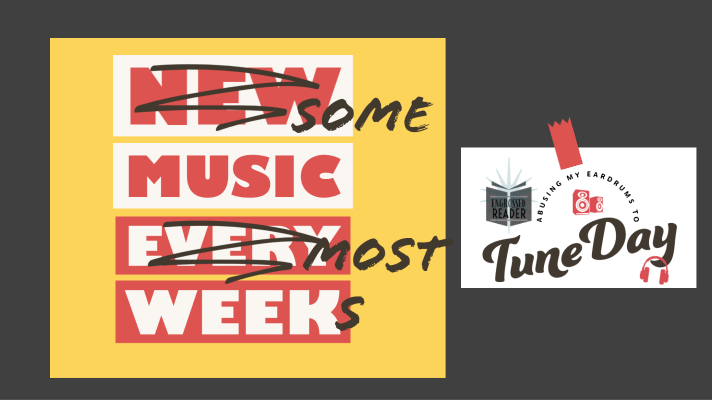 The Engrossed Reader blog was by its very name going to be about books in whatever format they came in.  But there was always going to be other topics that popped up with varying frequency.

I have written occasionally about music over the year and a bit, that this blog has been online.  In fact I knew that when I started to blog, I would occasionally offer up some music tidbits.   Which explains why music was referenced in the FAQs

The last few posts that I’ve written have all had music references e.g The 2020 wrap up  as does this post explaining why I wasn’t reading as much as I was expecting to. All it all – this is a round about way of saying going forward,  I will be sharing what I’m listening to on a more regular basis.  Likely to be on a Tuesday as I’m fond of the tag Tune Tuesdays/ TuneDays and it kinds of fits.

A bit of history

We’ve always subscribed to a music service which was the cheapest alternative to buying CDs for two adults with dissimilar tastes. Briefly it was Spotify, then Google Music (now YouTube Music)and now it’s Amazon Music because we are tragically an Amazon house ruled by Alexa.

Having subscribed to Amazon for a few services, it made sense to add music to the fold. Until a few months ago I would have said that I didn’t like the layout as much as Spotify.  It wasn’t intuitive, it lagged a lot and was missing what I thought was essential services.  Roll onto December 2020 and now we have podcasts, videos, and a better search.  Their back catalogue could be a bit older and more obscure but that’s a me wishing thing – which is probably not a problem for many others.

There’s no reeled up cassette or skipping CD to contend with.

I’m old enough to remember the days that you purchased music from a record shop or listened to a particular radio show with the hope that the song/artist you loved would be played.  Being on tenterhooks, finger hovering over the record button, praying that the DJ didn’t talk all over the song, which they invariably did. One of the many things that wasn’t great in the good old days.

My only gripe with Amazon Music is that my playlist is corrupted by anyone asking the communal Echo devices to play something. Every once in a while I will look at the recently played songs playlist and shake my head in disappointment.

These songs you say?

Amazon Music has informed that in 2019 my top songs stats were: 82 songs, totalling 5 hours 18 minutes.

And the range is from Metal to Christian to Dancehall. A rough count shows 16 songs by Slipknot, 6 from Bounty killer.

An accurate reflection I’d say; Amazon Music is getting to know my music tastes pretty well. To be fair, it’s no surprise as we do spend plenty of time together, usually daily rendezvous.

2020’s Top Songs Playlist hasn’t materialised yet, instead have a sneak peek at today’s homepage

Once a week or thereabouts, I will post about a song  I’m currently listening to or a music memory.  It might be a new release, something from the back catalogue or more likely an old song which is new to me.

You might be happy to hear or be saddened to know that these won’t be long detailed posts with lot of interesting, relevant or arcane facts.  I’m no music critic and wouldn’t want to attempt to take away this vital job from a qualified professional.

So please manage your expectations (should you have had any) as the scope of blog posts will be in the region of, I like this song and here is the video. And better yet, the plan is once a month there will be a an album recap inaddition to, or instead of a shout out to a Single.

Oh how I love to set myself a challenge.