Review – The Babysitter by Phoebe Morgan 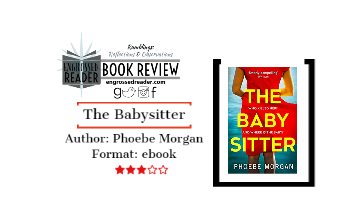 A woman is dead, a baby is missing, an affair is revealed. Two families are in turmoil.

The Babysitter  starts with the couple: Callum and Siobhan, their daughter Emma and Siobhan’s sister Maria.  All have just arrived on holiday in glorious sunny France from the East of England.  Though their settling in you get glimpses of disquiet in spite of the happy display.

The reader is sceptical of this display, knowing that this illusion of togetherness, display of typical family dynamics is glossing over cracks.  Those crack are irretrievably widened shortly with the revelation of infidelity, Caroline’s murder (Callum’s mistress) and Eve’s disappearance, the one year old that Caroline was babysitting the night she was killed.

Several red herrings and a couple of cul de sacs

The Babysitter is a pacey read, short snappy chapters through the point of view  primarily of Siobhan, Caroline and the one of the police detectives.  It is not a complex read but still an intriguing one as the who and why are tantalising.

And whilst it’s clear that it must have been one of the small cast of characters it wasn’t immediately obvious who did it. The Babysitter achieved the purpose of the book of revealing  motives in a straightforward albeit satisfying way, showing that all had secrets and therefore reasons to be involved in this crime.  Like me, you may already have guessed part or all the motivation along the way but will still want to read onward to the end to confirm your suspicions.

Husband Callum came across as appropriately smug, Way too satisfied with his perceived status: big fish in a small pond, trying to dazzle those around him with his TV exec job. I would be unsurprised if you weren’t as  eager as I was for his comeuppance. Very much cake and eat it too persona.  However the author was able to slowly reveal his personality so you weren’t immediately repulsed by his egotism.  I pitied more than disliked him for the choices he made as they disclosed his weak character.

The other woman Caroline was a fully developed character. She seemed utterly real…sadly.  Lonely more than needy, desperate for attention, to be noticed, coupled with the wish eventually of a family of her own.

Caroline life discloses how lives that appear ‘normal’ can in reality be isolated.  Her role illustrated that humans yearn for meaningful connections.  On the surface it could appear as if she was covetous, then envious.  Except wanting to be part of a relationship, family, community,  an active welcomed part of a network is a universal desire that most humans experience. That need which can be latent in some and all consuming in others, can drive people to make terrible choices.

And Siobhan the wife, working hard to keep the family together for the perceived benefits of ‘family’.  Her childhood too has played a part how she manages relationship. How she fights for her marriage. Desperately trying to ignore evidence of the affair subjugating her needs and hating having to make this sacrifice.

Siobhan reveals beneath this family’s exterior is a construct that consists of illusions, half truths and things unsaid.

Reading The Babysitter,  we never got to see Callum’s point of view and in a way that was a good thing as it reinforced the hollowness of him as a person. He seemed a mixture of needs and affectation. We didn’t need to read about his internal justifications to know that the choices he made were always self serving.

The format of the story was perfect as the interweaving of the present, then the past to get to know the personalities s better and the crime itself, really developed the plot and made it more exciting.  All the characters were well casted with flaws and all. The devastation and introspection of the grieving parents of missing Eve evolved deftly. The police investigation appeared plausible though plodding.  The setting of France and England added another dynamic which gave the plot greater depth. Overall a nice mystery that isn’t too taxing but a satisfying journey of whodunit and why.