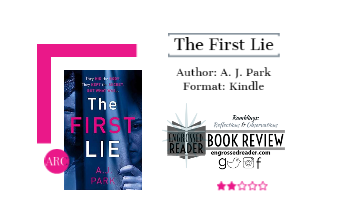 When Paul Reeve comes home to find his wife in the bathroom, bloodied and shaking, his survival instinct kicks in.

Alice never meant to kill the intruder. She was at home, alone, and terrified. She doesn’t deserve to be blamed for it. Covering up the murder is their only option.

But the crime eats away at the couple and soon they can’t trust anyone – even one another. Goodreads

I read the back cover of The First Lie and thought “how intriguing”.  Early on when  we were informed that Paul was a barrister on his way to being confirmed as a judge, it made the dilemma all the more juicy.

Moreover, how would Alice cope knowing that in self defence, she had killed a man and between them, they had agreed to hide the crime.   Lots to mull over and look forward too I believed, hoping we would investigate roles, responsibilities, blame, guilt, justification, etc.

The First Lie, started out well, with alternate chapters from the point of view of the married couple but after about 30%, it began to go downhill for me for a number of reasons., which I will limit to two because I just can’t..think more about this book.

I began to take a real dislike to both main characters

Alice went from a self assured woman (with some background trauma shared later in the story) to a grasping hot mess of need and crazy.  If this was trying to show what guilt and remorse mixed up with depression looked like then I’m staggered because this was a version that baffled and scared me.

Paul portrayed a loving husband who would do everything and anything for his beloved wife and their marriage.  Thus it was understandable but was never believable to me why they would hide the murder, even given the fact of his new job. Nor that he would be so easily swayed against common sense, his legal training and knowledge. Again clearly the stress of the event, the marital snipping and discord contributed to further poor choices.

Alice and Paul were really fortunate that the person whose murder they’d hid, wasn’t also classified as a missing person.  It was almost as if they were going to get away with it, no one was looking for this dead body. The police only entered the picture to ruminate about the murders of a group of men that was beginning to look like the work of a serial killer.   These two storylines naturally converged.

It was apparent not long after the murder who was involved,  and shortly thereafter the puzzle began to fall into place. But what kept me reading was firstly I dislike not finishing a book and two just how far would this couple go to cover the first lie.  The impressive levels that they sunk to was hysterical in its scope.

I can be a fan of light hearted, easy, coincidental, occasionally implausible reads,  but unfortunately The First Lie didn’t fall into this broad category. Any entertainment value was overcome by the inability to engage in this farcical ride.

My thanks to Netgalley and the publishers for a copy of this book in exchange for a candid review.