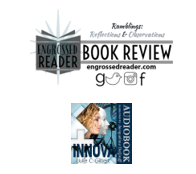 Churches are banned. Religion is outlawed. Freedom is dead.

Found guilty of “spreading dissent,” Jenna and David Hall are sentenced to re-education at the Innova Center.

Their home is forfeit. Their marriage is dissolved.

Once a famous actress, Jenna is afforded immunity from the most aggressive forms of therapy because they want something from her, but David is not so lucky.

He’s a hostage. Cooperation will keep him alive, but at what cost? Goodreads

The synopsis sold this book to me and coincidentally slipped neatly into my recent spate of reading dystopian novels.

I liked the world building, it felt real and just as importantly believable. A government that is increasing its restrictions incrementally, until finally, it’s at the point where it can make big changes without effective opposition.  A government that sees religion as one of the last stumbling block to its endgame.

Jenna was the prime character and she was well developed, the story told from her point of view. Secondary characters not as much but that was to be expected given the scope of the story. I liked that her faith was front and centre and sustained her throughout this ordeal.  I was reading on the go, so I couldn’t get a chance to make a note of the verses she quoted.  However, that will be an excuse to read again.

The only grumble I would have is that I felt it ended abruptly, there is so much more to know about this world.  The snippets shared by the staff at Innova made me want to delve deeper and wishing that certain themes were developed more than others.

Overall a good read that had me thinking about relationships and the role of governments.

Thank you to the author for a copy for this book in exchange for a candid review.