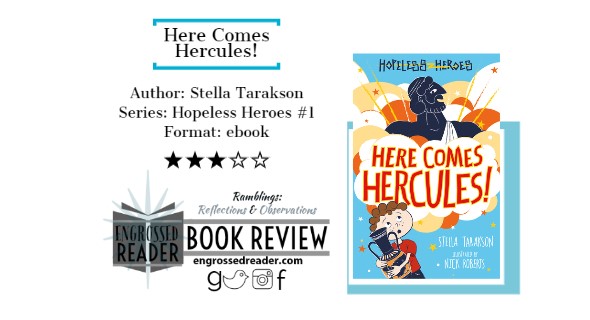 Hopeless Heroes is a 10 book series about a young boy’s adventures with Greek Gods. In Book One:  Here Comes Hercules! Tim encounters Hercules the demi-god and gets into a succession of mishaps as he tries to help Hercules return home.

There are many things to like about this well told story.  It has a great plot which is pitched correctly for the age group but doesn’t pull any punches about addressing real issues facing children such as bullying, the impact of finances on a  single parent household, children being more responsible at a young age and having to contribute to the household.

All of these issues are neatly overlaid by a rollicking string of disasters and fun characters. Hercules appears as if by magic from a broken vase in Tim living room, and unsurprisingly he is a fish out of water in this new modern world. His attempts at trying to adapt to the 20th century provides some hilarious scenes often unfortunately at the expense of Tim. Because whilst Hercules is invisible to everyone else, his actions and mistakes are evident to all.

And Where Are The Parents?

Usually when children go on these adventures or just away from home for hours at a time, I often wonder where the responsible adult in this scenario is. I didn’t have to wonder in this case as Tim’s mum worked two jobs so it wasn’t just a plot device or lack of character development that meant that Tim and Hercules could go off on various escapades.

Tim spends a lot of time alone, so I guess that even though Hercules’s efforts got him into trouble and under new scrutiny from the adults in his life, it seemed worth it for the companionship. Their friendship made up for all the mayhem.

So, in summary, there is much to like especially in the character development.  Hercules becomes self-reflective realising that using his strength is not always beneficial.  Tim is more resilient and able to stand up for himself.

Equally good is the lovely relationship Tim had with his mum, they communicated honestly with each other even if it means repercussions (for Tim!). They loved and believed in each other as evidenced by the kindness shown when the other was feeling disheartened.

Finally, the effortless way it introduced Greek terms and mythology into the story was great, a real asset; they were well integrated, and the reader was not overloaded with facts all at once or continuously throughout the book.  The illustrations were fun, helpfully demonstrating all the key parts and all the funny bits.

I’m looking forward to Book Two – Hera’s Terrible Trap, to find out more about the mysterious vase, the villainous Hera who trapped Hercules there and hopefully Tim’s backstory.

My thanks to Netgalley and Sweet Cherry Publishing for a copy of the book in exchange for a candid review.