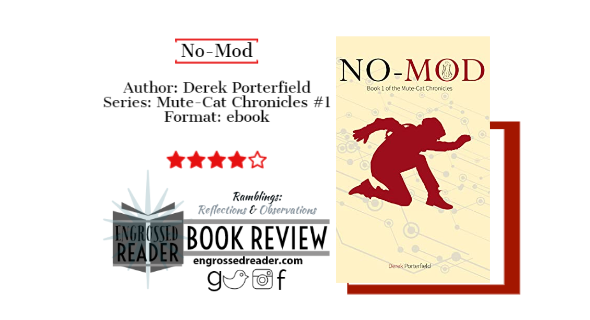 Not all books live up to their book blurb, but the synopsis for No- Mod did not oversell the contents.

“In the beginning, God was said to have created everything in fairly short order. Some say 7 days. Others say 3. The truth is that god created nothing. God flipped a switch. The machines have been building ever since.”

In the crowded techno-religious city of Aberthene, almost everyone is augmented by biomedical modification. Part machine, and part human. The church rules the state and controls everything from production to housing.

Addeleigh Simmons works in a religious building cleaning out suicide booths during the day while attending classes and studying at night. She hopes to soon afford the costly surgeries for the biomedical modifications that all of her friends have. She’s singled out as only human: a no-mod.

Her drab existence is upended suddenly when an armed group of Red Guards breaks into her dormitory. She escapes through a third floor window with her pet mute-cat, Bruce, and begins a journey that will expand her entire world.

She doesn’t know why she is being chased.

She doesn’t know who to trust.

But no one outruns the church.

Addie is being hunted.

Addie is hiding from God.

I really enjoyed reading No-Mod (Book 1 of the Mute-Cat Chronicles). The detail of this world was meticulous, events, products, belief systems, etc were explained in such a way that they were believable, realistic and often frightening in their credibility. I especially liked the insightful way the church’s history and influence were detailed and described.  Derek Porterfield has a real understanding of human nature, their motivations and personality types.  This is clearly illustrated by characters who are well rounded, flaws and all.

Addie is ‘singled out as only human: a no-mod’ the lowest in the social hierarchy that elevates those with biomedical modification.  She’s on the run escaping from unknown pursuers, running from the only home she’s known to the unknown.

Addie’s journey is in parallel to a group of thieves whose last deal hasn’t gone to plan, they too have had to leave town in a hurry.  Eventually their path collides, and we find out more about these resilient kids and their influence on Aberthene.

There is so much to like in this book –  I am quite taken with this techno world. I was invested in this story and rooted for the good guys in battle, cheered them when victorious and commiserated in their setbacks.   The pacing was excellent, it wasn’t relentless journeying or combat, rather intuitively interspersed with backstory, character development and foreshadowing. Finally, the baddies were almost up there with icons such as Darth Vader and Lord Business, they really can astound you with their machinations – there is no limits on their ambitions.

Suffice to say, I have a compelling need to find out what happens to all the key players and can’t wait for the next instalment of complicated dealings, new revelations and confrontations.

My thanks to BookSirens and the author for a digital copy of this book in exchange for a candid review.