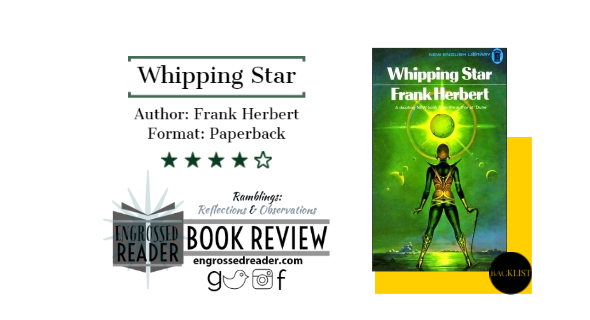 Whipping Star is firmly science fiction, the world, no universe building is detailed enough that it’s believable and compelling. So much so that you mostly ignore all the strange new terms that come your way. Allowing you to focus on the plot rather than having to  spend most of your time querying an anomaly or illogical premise.

Suddenly – the end of all life throughout the entire Galaxy! It was only weeks away, or days – or even hours. It all depended on the survival of the last of the entities known as Calebians.

But the Caleban was dying – subjected to systematic torture by the richest, most wicked woman in the Galaxy. Unless she could be stopped, the end was only a few days away, or hours – or even minutes!

My take on the plot

The plot is in a nutshell a loose mystery, the government are on the hunt for a rich deviant whose actions could spell the end of the world.

Mliss Abnethe is a deviant in more ways than one, she goes against the moral code of flogging, was vilified for it, received treatment and was believed ‘cured’ of this fixation. However her treatment focused not on the action but rather on the suffering on the recipient, leaving her compulsion unaddressed.

She hires a Caleban, the species entity that introduced this universe to instantaneous space travel, to become the recipient of her desire for flagellation, despite knowing that the demise of the Caleban (Fanny Mae) would mean the devastation of sentient life.

Enter Jorj X. McKie, Saboteur Extraordinary, an investigator who needs to get the heart of the mystery to save the universe.

McKie goes on a whiplash adventure between worlds to find out this and more.  Along the way, he manages simultaneously to decipher the complexities and inner workings of a being such as Fanny Mae.  McKie, is ruthless yet sympathetic, willing to do what’s necessary and also right.

What I found enjoyable

I like this book for the imagination, the ideas that are rooted in truisms, nothing is far fetched. The premise of the Bureau of Sabotage as an government organisation that is halting the destructive force of a ruthlessly efficient Government is disturbing and mildly amusing, creating internal government discord – with the capacity for violence – for the greater good.

What I enjoyed most was the illustration of how technicalities matter, the adherence to contracts, rules and the letter of the law. Delving into cognisance, drawing attention to the root of suffering, individualism and group thought.

It is everything that I like in Science Fiction.

I haven’t read this book in about 15 years. But on picking it up I immediately remembered chairdogs, float homes and stage frozen Pan Spechi and what these terms meant.  Perhaps because they’re descriptive as well as inventive is why they are still memorable for me.

My soft spot for Frank Herbert is not only  because he wrote Dune, he’s more than that massive contribution to the genre.  It’s the ideas he expands on to illustrate the human condition.  Truly a master.