Review – When I Was Ten by Fiona Cummins 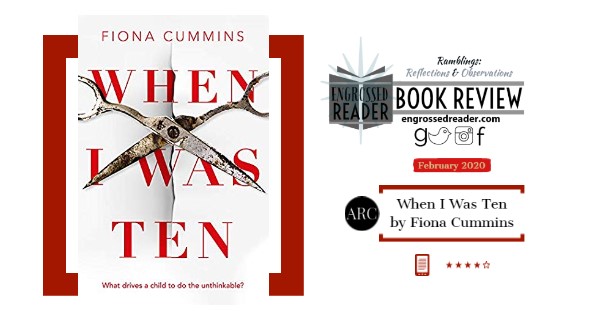 When I Was Ten is about a childhood crime: a preteen killing their parents, the effect on her sister and the aftermath for both siblings.  The focus is on the recent publicity that threatens to create another media frenzy  and hound the convicted killer out of hiding.

She had lived a lie for thirteen years, and the perfect life as she had known it was about to change forever.

Everyone remembered Sara and Shannon Carter, the little blonde haired sisters. Their Dad was the local GP and they lived in the beautiful house on the hill. Their best friend, Brinley Booth, lived next door. They would do anything for each other but everything shifted on that fateful day when Dr Richard Carter and his wife Pamela were stabbed fourteen times with a pair of scissors in what has become the most talked about double murder of the modern age.

The girls were aged ten and twelve at the time. One, nicknamed the Angel of Death, spent eight years in a children’s secure unit accused of the brutal killings. The other lived in foster care out of the limelight and prying questions. Now, on the anniversary of the trial, a documentary team has tracked down one of the sisters, persuading her to speak about the events of that night for the first time.

Her explosive interview sparks national headlines and Brinley Booth, now a journalist, is tasked with covering the news story which brings to light fresh evidence and triggers a chain of events which will have devastating consequences

This is a  clever book. Clever in the sense that it keeps you questioning what is said, and done and who to believe. The format of telling the story from the point of view of the girls directly affected by the death of their parents and the reporter investigating, with flash backs to flesh out the detail was ideal.  It made you pay attention, as the more information you found out, the likelihood conclusions you had just come to had to be adjusted.  My opinions and emotions switched frequently notably but not limited to anger, justification, righteous vengeance, incredulity, amazement and then back again to something else.

Fiona Cummins skilfully highlighted the reality that abuse in the home by those resolved to hide it can be successful if the abuser is adept and/or perception of character is based on a promoted fictitious ideal.  It reminded me that people who enjoy terrifying others especially vulnerable ones, those they have authority over, are inhuman; there is something broken in them which they want to break in others.

When I Was Ten is firmly about the rippling effects of abuse and how it affects every part of your life, whether you were directly or tangibly related to the event. Together with the impact it has on your developing character and future. It also exposes parental relationships showing the bad and good: how parents can let us down badly, and conversely when there is love and care.

This book is a must for those who love well written psychological thrillers, that pulls on the heartstrings but not gratuitously so and with characters that you are rooting for. It will make you feel big emotions, be judgemental and sincerely consider your views on several serious issues.  What a gripping read!