Review – The Testaments by Margaret Atwood 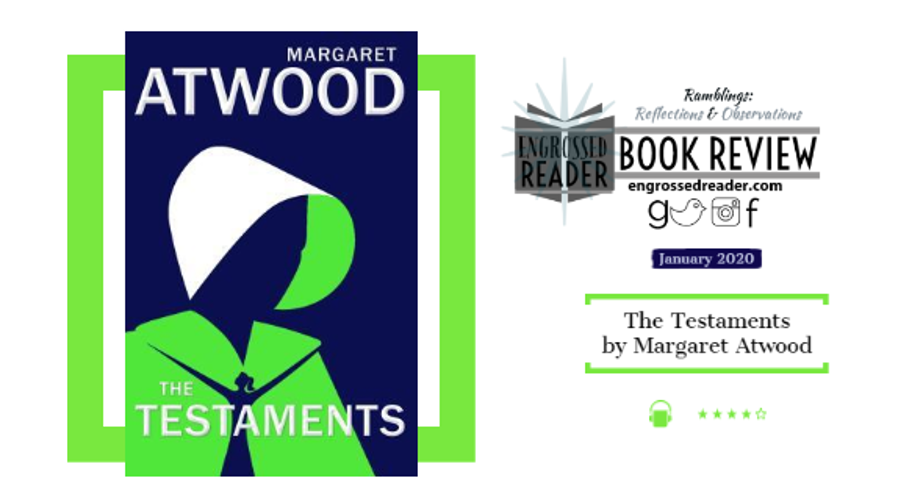 Please be aware that SPOILERS are inferred throughout this review

Even having read The Handmaiden’s Tale recently, I didn’t have any specific expectations for The Testaments and believe that position placed me in the right frame of mind.  Gilead was still pretty much a mystery to me, I knew a little bit, yet wasn’t curious enough to have a burning  list of questions awaiting answers.

In this brilliant sequel to The Handmaid’s Tale, acclaimed author Margaret Atwood answers the questions that have tantalized readers for decades.

When the van door slammed on Offred’s future at the end of The Handmaid’s Tale, readers had no way of telling what lay ahead for her–freedom, prison or death.

With The Testaments, the wait is over.

Margaret Atwood’s sequel picks up the story more than fifteen years after Offred stepped into the unknown, with the explosive testaments of three female narrators from Gilead.

“Dear Readers: Everything you’ve ever asked me about Gilead and its inner workings is the inspiration for this book. Well, almost everything! The other inspiration is the world we’ve been living in.” –Margaret Atwood Goodreads

It is almost petty but my review will focus only on the three female leads,  I do not want to spend time discussing the men here beyond noting as in The Handmaid’s Tale, those of Gilead were generally privileged and brutal.  Others in the Resistance, or from other countries fervent freedom fighters.  A sweeping generalisation it goes without saying although based in some fact.

In my opinion, Aunt Lydia, carried this book, not just because she eponymised the beginning and end of Gilead but because her character was the most stimulating, her story the most fascinating of the three narrators.  She’s a shrewd, savvy woman who took the pragmatic way out and above all she was a survivor.   Aunt Lydia, could read a room, situation or person and knew what to say or do to ensure that she didn’t end up on the losing side.   This meant compromising morals, gender betrayal but on the flipside, an increase in personal power and influence.

Sometimes it’s difficult to  remember that automatically Aunt Lydia was in a vulnerable position by virtue of the fact she was a woman, so it is remarkable the heights she rose to in the Gilead hierarchy. Only by reading this book yourself will you be able to answer the question –  if Aunt Lydia felt if it was worth it – the ends justifying the means.

The other two narrators are teen girls: Daisy who lived in Canada and Agnes, born and raised in Gilead.   I don’t know if it’s because their characters  were less developed and/or without an interesting or complex back story but their sections were not as engaging.

I found Daisy to be tiresome and oblivious to her circumstances.  She was the most passive of people who stood around looking blankly, not knowing the right questions to ask, nor responding in an appropriate fashion to obstacles in her way. Coupled with her exasperating reactions when on several occasions, people in her life bungled when telling her vital or pertinent information – Daisy didn’t question or query.  My experience was sometimes she behaved as if SHE grew up in an restrictive environment with no autonomy, which wasn’t the case.  If I say anymore I will become annoyed all over again with her character.

Agnes’s story was more compelling.  It was horrible to see the life of a young girl in Gilead and the limitations they were subjected to, practically from birth. Coupled with the depiction of the path to marriage, made my  skin crawl.  Yet Agnes was quick witted, observant and tough and that stood her in good stead as her journey did not take a straight road to freedom.

I felt The Testaments was patchy in places, it didn’t flow as well especially when it reverted to the Daisy’s section. The final section I felt… I don’t know how best it could have been portrayed but the final Gilead sections felt contrived, to fit with what we already knew – its destruction and fall. We knew the outcome and therefore all elements had to fall into place to make it so.

The Testaments  answered a lot of questions that I didn’t even know I had. Made me grateful for what I now know and concluded a series that I didn’t think needed to be started but was somewhat glad it did.

In short, a good but not great read.