Review – On the Come Up by Angie Thomas 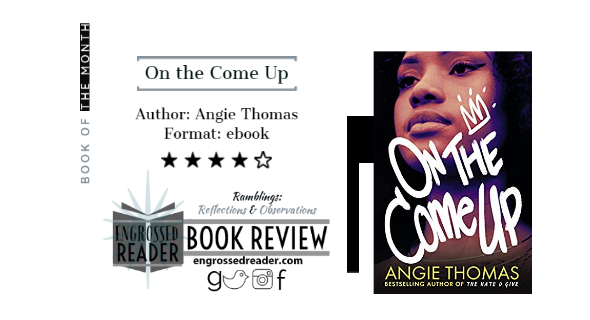 On The Come Up, is about a young skilled rapper trying to break out of the limited choices her neighbourhood offers and enable her talent to give her that big break.

The award-winning author of The Hate U Give returns with a powerful story about hip hop, freedom of speech – and fighting for your dreams, even as the odds are stacked against you.

Bri wants to be one of the greatest rappers of all time. As the daughter of an underground hip hop legend who died right before he hit big, Bri’s got massive shoes to fill. But when her first song goes viral for all the wrong reasons, Bri finds herself at the centre of controversy and portrayed by the media as more menace than MC. And with an eviction notice staring her family down, Bri no longer just wants to make it – she has to. Even if it means becoming the very thing the public has made her out to be.

I wish I could say it was  an eye opening depiction on the reality of being young, black and living in the United States.  The opposition faced on a daily basis in almost all situations.  Having to monitor and modify your behaviour to meet the expectations of others – their perceptions of you. But it wasn’t, these are known issues.

However what Angie Thomas has brought to the table is an excellent rendering of what it’s like to be a teenager, facing these typical situations, those which affected her life, impacted on her, which for the most part, she had no control over.  It neatly showed the conundrum of that point where a child has to step up to help but shouldn’t have to, doesn’t really have the tools to do so and ultimately shouldn’t have this level of responsibility.

Bri is a typical teenager, rash, impulsive but also thoughtful. I found her annoying in part but realistic at heart. She wrote about her life and she had plenty of source material. The skill of the words rhyming but also the flow, matching the beat was superb   Her creativity and talent excelled and shone in this book.  I’m not surprised to learn that Angie Thomas is also a rapper.  Her rhymes were  infectious – I want to hear these songs for real.

You too will want Bri to win on talent alone and make the right choices, because she deserved it , but this isn’t a fairy tale, the reality is,  being talented isn’t enough.  Who you are, who people think you are and where you come from are factors. There is luck, who you know, what you are prepared to do for this opportunity and being in the right place at the right time.  Angie Thomas shows that it’s a struggle to focus on your dream when your everyday takes so much effort.

I read On The Come Up some time ago. And I still don’t have the right words to express how much it spoke to me. Sometimes I get this mental block where I can’t articulate well enough and then I don’t want to try for fear of failing to do justice.  It’s something I’m working on.

Anyway, to summarise. It was uncomfortable reading, it made me reflect and consider, ultimately I loved it.  I didn’t like the hard choices that were made, but appreciated what had to be done.  What made it especially poignant as I was about half way through I found at that the new and upcoming rapper Pop Smoke was killed.  I was stunned, I’d written previously here how infectious his first single was and was currently enjoying on repeat his latest release.  To see a young life cut short is saddening.

On The Come Up is my book of the month for February 2020.