Review – Keeper of the Lost Cities by Shannon Messenger 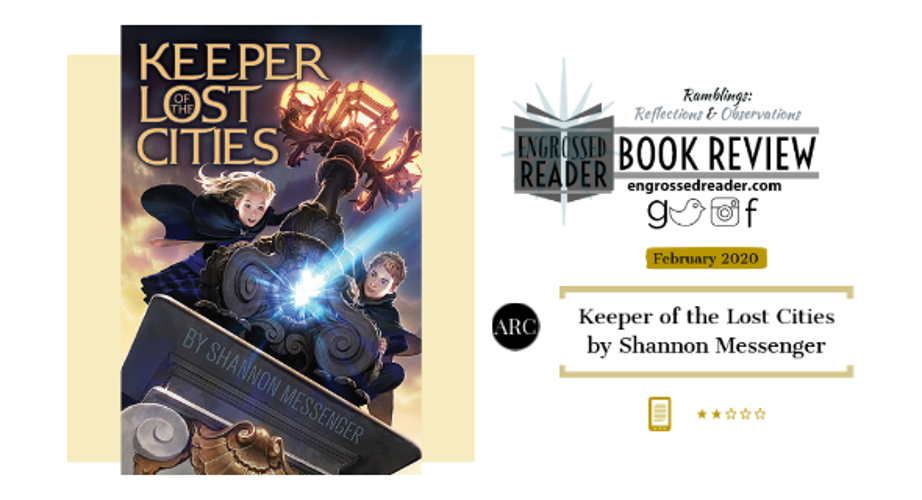 Twelve-year-old Sophie Foster has a secret. She’s a Telepath—someone who hears the thoughts of everyone around her. It’s a talent she’s never known how to explain.

Everything changes the day she meets Fitz, a mysterious boy who appears out of nowhere and also reads minds. She discovers there’s a place she does belong, and that staying with her family will place her in grave danger. In the blink of an eye, Sophie is forced to leave behind everything and start a new life in a place that is vastly different from anything she has ever known.

Sophie has new rules to learn and new skills to master, and not everyone is thrilled that she has come “home.” There are secrets buried deep in Sophie’s memory—secrets about who she really is and why she was hidden among humans—that other people desperately want. Would even kill for.

In this page-turning debut, Shannon Messenger creates a riveting story where one girl must figure out why she is the key to her brand-new world, before the wrong person finds the answer first.

Keeper of the Lost Cities by Shannon Messenger starts with a good premise: a tween who’s not like everyone else.  Sophie knows this for a fact – it’s not a belief or a guesstimate – because she’s telepathic.  Hearing the thoughts of other makes her differences more evident.

She’d lived every day since she was five in constant fear of discovery. She wasn’t sure how much longer she could keep it up. The headaches from her telepathy were almost unbearable— and if they were going to get stronger . . . Not to mention the loneliness. She’d never felt right with her family. She’d never had any friends. She didn’t belong in the human world, and she was tired of pretending

This is a generalisation or more accurately a truism, that most people want to feel necessary, be important and it’s set up from the beginning of the novel that Sophie is all that and more. Academically gifted, conventionally pretty and with this added extra gift – that is currently a curse but who knows, maybe in the future could be a blessing. We – Sophie and the reader – are taken on a journey to a new world of fantasy, where we hope these, and other questions will be answered.

It’s a slow bumpy ride to finding out more about Sophie’s history and importance why was she spirited away as a baby from this land of Elves to modern day Earth.  Why slow and bumpy? Mainly as a big section of this book is essentially about her day to day activities getting used to her new home and going to school. I’m not a fan of high school dynamics.

We see Sophie trying to embrace this new world as finally, there is some commonality between others.  She tries to make friends and does. But it now appears an unfortunate fact of life, that regardless of where in the multiverse you are, there are still high school cliques. So not all the young people are waiting with outstretched arms to embrace the lost and now found politically significant Sophie.

Sophie is a mystery to herself and this new world and at times I wished the story would hurry up and get past the big reveal and get to the heart of the matter – the political factions machinations.   Whilst I understood the purpose of the mundane activities depicted – as a way to world building and getting deeper into these stereotypical characters – it doesn’t negate, that at times the pace crawled.

What I wasn’t so keen on

What I will take from this book

An insight into being the outsider in different environments even when you’re trying your best to fit in. And that home isn’t home immediately, it does take time to belong.

Grady and Edaline weren’t like her parents, and Havenfield wasn’t like her old house— but maybe that was better. Maybe it was easier if they were different. And maybe, with time, it would really feel like home.

I wished that Keeper of the Lost Cities was a rollercoaster ride on the hunt for answers, instead it was more like sedate spinning teacups.  Luckily not too fast or too slow either would give me a headache, equally not thrilling enough to make me want to queue for another go.   All in all not unpleasant, more so unsatisfying given the great themes at play. Though, I’m sure there are those who will enjoy, and appreciate better this gentle saga.

My thanks to NetGalley and Simon and Simon & Schuster Children’s UKs for a digital ARC in return for a candid review.