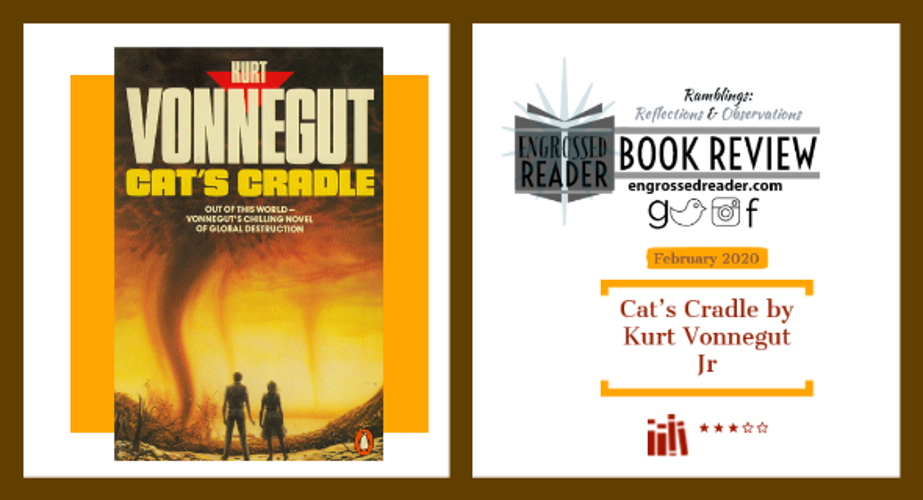 Cat’s Cradle by Kurt Vonnegut Jr.  is a book  about big issues, nuclear war, environmental concerns and the role of governments.  As you are reading, it doesn’t take long to start reflecting on life, hope and the future. It’s not a defeatist book but it might come across that way.

Dr Felix Hoenikker, one of the founding ‘fathers’ of the atomic bomb, has left a deadly legacy to the world. For he’s the inventor of ‘ice-nine’, a lethal chemical capable of freezing the entire planet. The search for its whereabouts leads to Hoenikker’s three ecentric children, to a crazed dictator in the Caribbean, to madness. Felix Hoenikker’s Death Wish comes true when his last, fatal gift to humankind brings about the end, that for all of us, is nigh… Goodreads

Cat’s Cradle was first published in 1963 and it is a book out of time and completely of its time.  For instance there are no politically correct words here – there are racial epithets and derogatory terms for women. I read past that to the themes that resonated. I don’t know if it was ironic or intentionally thought provoking that a black leader was pivotal to this story and the white saviour came and did not save.

However the issues this book raises are still relevant  and discussed today but just not using these words. What I vaguely remember from reading it before and what resounds again now is the power of religion to give comfort and explain the mysteries of life.  The incongruity being that Bokononism is a new cobbled together religion based on the concept of ‘foma’, which is defined as harmless untruth

“A foundation of Bokononism is that the religion, including its texts, is formed entirely of lies; however, one who believes and adheres to these lies will have peace of mind, and perhaps live a good life.” Wikipedia

On the surface, this feels like a superficial read about a dysfunctional family yet it is much more than that, deep themes are explored stimulating the synapses to ponder on the meaning of life, family and our world.