Review – Calixta, The Vanquishers of Alhambra by Omayra Vélez 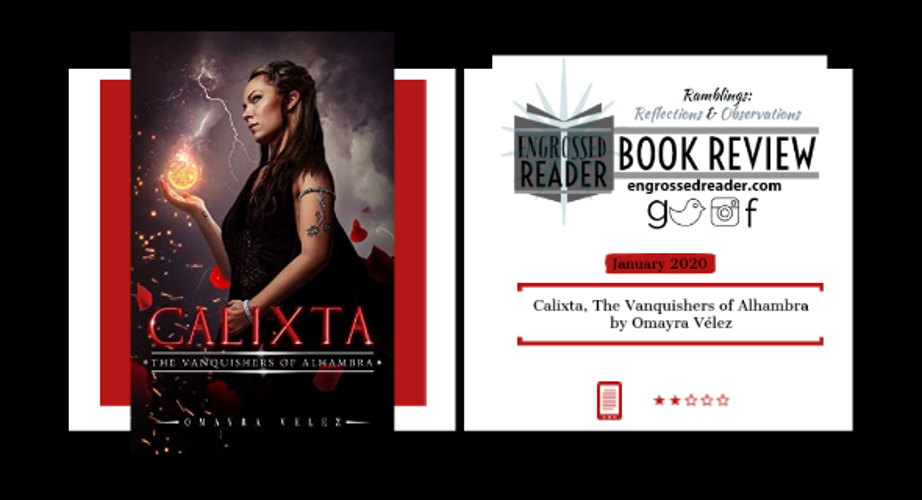 Series: The Vanquishers of Alhambra

The book cover caught my eye and the synopsis drew me in. The world where Calixta, The Vanquishers of Alhambra is set is a richly developed one. A world with magic and a an almost feudal type of society where people are designated roles by birth and assigned a trade or function for life and kept at that station by a regulatory tattoo. A place where you hope that misfortune or malice doesn’t cast you into slavery and keep you there.

Calixta lived in debauchery, lacking of love and hope. However, she died, saving the lives of two innocent people. The virtues broke the rules and sent her back to life, with some special gifts. Now, She will burn alive anyone who would try to take from her what little she has left. She knows she has a task to do; mages must be protected. Evil is after her, and she knows she has to help others, but society had been a bitch. She must fight back. She has the power, but will she learn to love even in the midst of chaos?

For years Vanquisher Dreyden had been looking for her, and he found Calixta smelling like shit. He helped her when she most needed help. But he also used her miserably. She almost roasted him alive. He did fight her. He will fight with her. Will he fall for her?

Will Evil destroy what these two are trying to create? Mages must be protected, but Calixta and Dreyden are running for their lives, will they find all the members of their team? Will the next time she dies be the last?

This is a  world of magic and the fight of good against evil  abounding with religious allegory.

We meet a bunch of not so merry men and women as they fight against demons, encounter fae and try to stop the encroaching darkness from taking over the world.

I wanted to like this book, in fact I wanted to love it given the plot: it had all the themes that I typically enjoy. But I didn’t like the way it was written; it was completely off putting – too much show and not enough tell. Pages and pages to describe one scene and a sentence to indicate months elapsing. Characters, especially poorly described villains made it impossible to like or engage with the story.

Which was a crying shame leaving me torn between giving it 1 star for the frustration and disappointment in the execution of a fantastic idea. But the world building in spite of the delivery deserves a 2.

My thanks to NetGalley, Omayra Vélez and Independent Book Publishers Association (IBPA) for an advance copy of this book in exchange for a candid review.