Review – The Last Smile in Sunder City by Luke Arnold 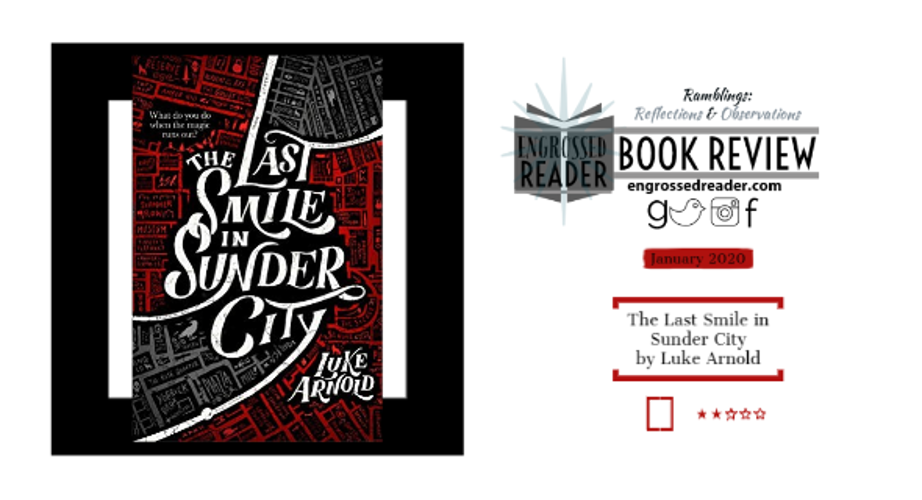 The premise of The Last Smile in Sunder City is good:  A land where magical creatures (dwarves, goblins, gremlins, vampires, witches, you get the idea) are left redundant, in reduced circumstances: without their magic, the fundamental part of themselves.  A world where magic is gone, brutally ended by humans. How do Magum (magic folk) try to forge a life in this new reality and what would they do about the beings who were responsible for this tragedy?

I liked the sound of it as soon as I read the synopsis.

I’m Fetch Phillips, just like it says on the window. There are a few things you should know before you hire me:

2. My services are confidential – the cops can never make me talk.

It’s nothing personal – I’m human myself. But after what happened, Humans don’t need my help. Not like every other creature who had the magic ripped out of them when the Coda came…

I just want one real case. One chance to do something good.

Because it’s my fault the magic is never coming back. Goodreads

Fetch Phillips is a man for hire, rough around the edges with tantalizing snippets of his back story being disclosed every so often in flashback and whenever he meets up with a new character.  It is remarkable that he’s employed given how disliked he is by everyone.  His latest case is finding a missing vampire school teacher.

Once I got to the setup, it kind of went downhill for me from there.  I don’t know if it was the writing style, the volumes of information that was shared at every interaction with humans and non-humans or the languid plot but I was unable to become immersed or even interested in the story.

And believe me, I tried. I read at different times of the day, different lengths of time. Gave myself days off from reading the book, to give me an opportunity to miss it. My longest avoidance was nine days. But each of the innumerable times I picked this book up, I ended up unenthused within moments or fast asleep.

Sunder City, is an alluring place yet the world-building was clunky. Whenever Fetch went somewhere, spoke to someone, daydreamed or passed out, there were monotonous paragraphs of exposition about another interesting feature of Sunder City.  Emotions, feelings, and characterisations were stated rather than described. The first time that I recall was when Fetch said that the principal didn’t like him.  At that time, there was no indication from an action or thought that Fetch was disliked. It came out of nowhere.

If I take a chance on a plot or a genre and don’t find it to my taste, I’m happy to say that’s my fault – I went out of my comfort zone, got pins and needles or a kick in the shins and would have to live with the residual effects.   In this case, the fantasy genre and synopsis sounded right up my street.  That’s the galling thing –  that there were flashes of brilliance albeit,  few and far between.  It was disheartening to wish for and not obtain prolonged bursts of this brilliance.  For instance, the introduction and backstory to the Siren race was memorable and thought-provoking.  Most of the history of those who used to have magic was quite fascinating, it was just the execution that left me cold.

Likewise with Fetch. Fetch is front and centre of this book and therefore it lives or dies by his portrayal. I didn’t get the version of a charming, disreputable screw up with a heart of gold, looking for love and a place to belong. My Fetch droned at me, was exasperating, his actions made me groan in despair, shudder in disgust and literally raise my fist in the air, like a cartoon comedy character, whilst shaking my head in annoyance.

It was incomprehensible, impossible that someone could be this oblivious, make these many mistakes and not learn a jot from it? How can you be present at most of the pivotal moments in Sunder City’s recent history and not realise the relevance until someone punches you in the face or explains it to you in a more tactful manner?

Actually, in all honesty, how was Fetch still alive given all that he had experienced?

And that’s me done. Exhausted by it all. If I say anymore, I’ll go into an incoherent stream of thought with no end in sight. I did finish it but it was difficult,  I struggled.  It took practically a month from beginning to end, which if I do say so myself, is unusual. The only reason I finished reading it was because I hate abandoning a book.

By the end,  I had no interest in finding out the who, what, why of the missing vampire.  When I got to that part I was indifferent, my only thought was ‘oh, so all this angst, running hither and yon… FOR THIS!’ Also known as setting the stage for book two in the series.

Lovely premise, shame about the delivery.

My thanks to NetGalley, Little Brown Book Group UK and Orbit for an advance copy of this book in exchange for a candid review.