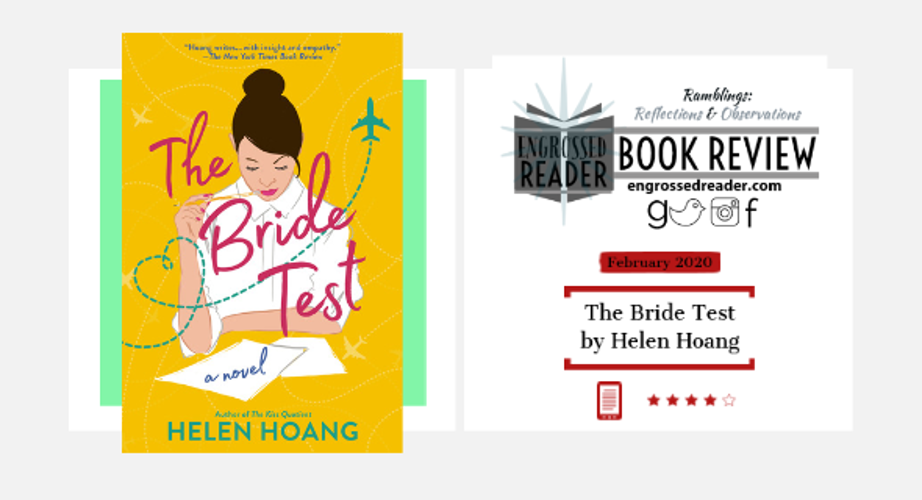 I don’t remember going to the library app, reading the synopsis for The Bride Test and thinking ‘sounds like a reader’ and reserving it.  So, it came as a surprise when I popped into the app for something else entirely to find that The Bride Test had been downloaded a few days earlier.  I debated on whether to return the ebook before wryly admitting I must have liked the book to have shortlisted it, it’s Valentine’s Day soon, so why not.

All in all a bonus

Khai Diep has no feelings. Well, not big, important emotions – like grief. And love. He thinks he’s defective. His family knows better – that his autism means he just processes emotions differently. When he steadfastly refuses to consider a relationship, his mother takes matters into her own hands and returns to Vietnam to find him the perfect bride.

As a mixed-race girl living in the slums of Ho Chi Minh City, Esme Tran has always felt out of place. So when the opportunity arises to go to America and meet a potential husband, she can’t turn it down. This could be the break her family needs. Seducing Khai, however, doesn’t go quite as planned. Esme’s lessons in love seem to be working… but only on herself. She’s hopelessly smitten with a man who’s convinced he can never return her affection.

As Esme’s time in the United States dwindles, will Khai let his head catch up with his heart? Will he find the strength to let go, and let love in? Goodreads

This light-hearted spin on the mail-ordered bride trope was a perfect afternoon read. Following single mum Esme from Ho Chi Minh City taking the opportunity of a better future for her and family, by going to America and wowing a stranger into love and marriage. We see Esme grow and change not just to fit in but also because she has the time and space to evaluate her life.

I almost wrote a reluctant bachelor instead of stranger, but I don’t think Khai was.  Women just weren’t on his radar in any significant way, however, the moment a gorgeous one came to live in his home, was in his eye line then a growing awareness and interest began. Khai’s progress in romantic engagement is brutally honest yet it was fascinating to see the realities of his circumstances.

What makes it different

Khai has Autistic Spectrum Disorder (ASD), likes his routines and is happy with his life.  He has a rich family life and a mother who loves him but is also desperate for grandchildren.  A mother who is prepared to take matters into her own hands to facilitate this outcome by jumping on a plane and shortlisting potential candidates (daughters in law) in person.

What makes it great

What makes this book stand out from the crowd is the humour, the Vietnamese culture, the clear way of explaining neuroatypical thinking and highlighting the assumptions we all make: assuming everyone thinks and behaves the same as we do because there is a shared understanding on common issues.  There were real issues addressed such as family obligations, the stigma of stereotypes, socio-economic constraints, etc which were handled fittingly.

The Bride Test was a fun contemporary read, that showed falling in love, relationships, and family life in a convincing way. Yes, there were coincidences and a happy ending but not at the expense of character development. These aren’t one dimensional characters, they grew and matured in true to life fashion.

Helen Hoang writes perceptive romance novels with a diverse, inclusive cast. They are fun, humorous and sexy.  I am really looking forward to book three The Heart Principle, only sorry that I have to wait until 2021 until it arrives.

She wore the highest, scariest heels, Mỹ had ever seen and a red skin tight dress that ended right beneath her butt. If you believed anything Mỹ’s grandma said, that girl would get pregnant the second she stepped foot on the street. She was probably pregnant already – from the potency of a man’s child-giving stare.