Review – Nothing Important Happened Today by Will Carver 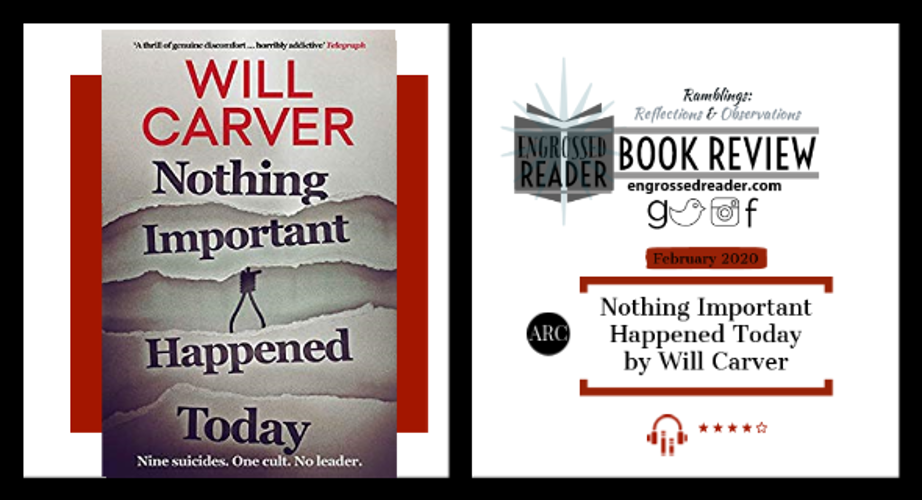 The synopsis already sets you up for what the story will be about, but it was as if I was unprepared for the eerie dread that Will Carver was able to impart as I was introduced to the nine strangers who would shortly kill themselves simultaneously on a public London bridge. It was all done so very calmly, almost clinically narrated in the third person. Belying the severity of the incident.

When strangers take part in a series of group suicides, everything suggests that a cult is to blame. How do you stop a cult when nobody knows they are a member?

Nine people arrive one night on Chelsea Bridge. They’ve never met. But at the same time, they run, and leap to their deaths. Each of them received a letter in the post that morning, a pre-written suicide note, and a page containing only four words: Nothing important happened today.

That is how they knew they had been chosen to become a part of the People Of Choice: A mysterious suicide cult whose members have no knowledge of one another.

Thirty-two people on that train witness the event. Two of them will be next. By the morning, People Of Choice are appearing around the globe; it becomes a movement. A social media page that has lain dormant for four years suddenly has thousands of followers. The police are under pressure to find a link between the cult members, to locate a leader that does not seem to exist.

How do you stop a cult when nobody knows they are a member?

Suicide is a fraught subject to think about let alone discuss. There is always the inquisitive nature of the reasons that the choice was made and sometimes the accusatory underlying thought of the inconsideration, and the effects on friends and family left behind.  It is the tone as much as the words spoken and unspoken by well-meaning friends and spiteful onlookers which cut to the quick.  So, it’s beneficial that the point of view flips to the first person, and we find out more about these individuals and their motivations. So we the reader, don’t start down that unhelpful judgemental road.

Knowing more about their individual circumstances somehow doesn’t give more than an inkling why suicide was a consideration.  The drip-feed of information, hint, and clues are really well timed and keep you anticipating ‘what next?’.

We are told that these are the nobodies, who don’t want to kill themselves but do. However, whilst they are labeled nobodies, they are in fact everyman, representatives of a wide demographic. We all know people like this group, and maybe we might be one too, but we hope not. We don’t want to come to the realisation that we’re part of a group with a suicide mission.

But I digress, this isn’t just a dark tale about suicide, it is about the workings of a cult when the leader is incognito and the authorities are at a loss – without a clue and looking here, there and everywhere but somehow not in the right places. I won’t say anything about incompetent police tropes.

It’s about the ripple effects of these deaths on those around and further afield. The role of trolls, the susceptible, the vulnerable and people numbed by life.

As the novel is interspersed with vignettes on cults, their leaders, serial killers and victims, Will Carver has thoughtfully given us (the reader) enough context and examples to assist us in the hunt for the leader and other members of the group, so we are not reliant on the police who appear incapable of solving this in a prompt and satisfactory manner.

This book is primarily a mystery because while terrible, suicides happen more frequently and are greater understood than cults, which occur less so but are not unheard of.  It is all quite convoluted, but the original question remains recurrent throughout the book – how are these people linked?  Because it would be nigh on impossible for actual strangers to be this coordinated: synchronized suicide with matching accessories.

Why you should read this

I feel awful to write this given the topic, but I have to admit that Will Carver writes exceptionally well, with humor and interest, making suicide, other difficult subjects including loss, fear, and broken lives accessible and real.  The third person narrator’s voice was perfect, engaging, informative, with a flat affect devoid of warmth which starkly highlighted the content more than if there was an emphatic emotional delivery when discussing the cults and serial killers,

I enjoyed Nothing Important Happened Today immensely and the only reason why it’s not 5 stars from me, is because of the denouement. It bordered realistic, but didn’t quite deliver on the motivation.

Recommended for those with an interest in reading good books with a twist throughout.