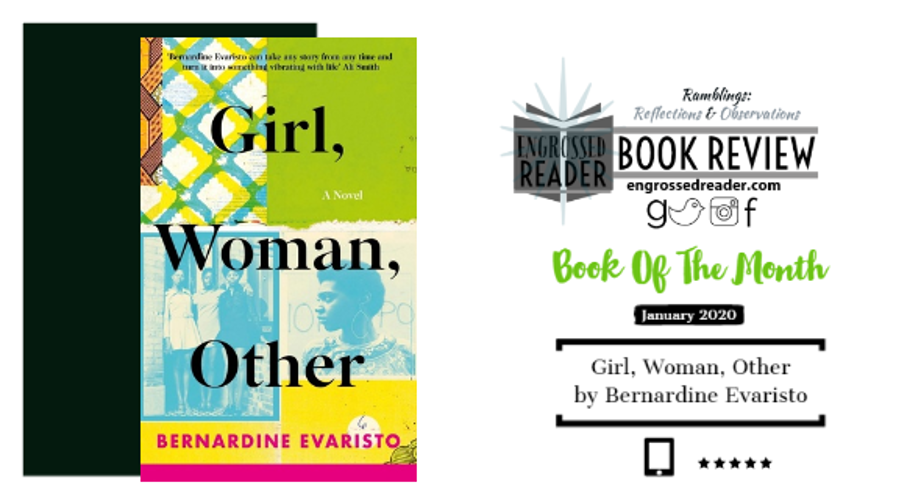 Girl, Woman, Other was my book of the month for January 2020. And it’s taken me until mid-February to supply a review show why I enjoyed it so much.

Why has it taken so long?

I don’t know if it’s the unflinchingly honest portrayal of life, the themes that resonate so keenly or still being in awe, that has kept me lost for words to articulate, why Girl, Woman, Other  is a five star read and why it was my favourite out of all the books I read that month.

Girl, Woman, Other follows the lives and struggles of twelve very different characters. Mostly women, black and British, they tell the stories of their families, friends and lovers, across the country and through the years.

Joyfully polyphonic and vibrantly contemporary, this is a gloriously new kind of history, a novel of our times: celebratory, ever-dynamic and utterly irresistible. Goodreads

What I thought it was about

Girl, Woman, Other follows the lives of mainly women of colour and each story covers a period of years, eventually culminating in several decades in total.  We see lives buffeted by fate, missed chance and denied opportunities. Lives that have been challenged, revealing abuse in many forms.  Evidencing that all forms hurt the recipients and their network directly or indirectly.  That isn’t to say it is predominately negative: a range of emotions are illustrated. We also see love, which is expressed in a variety of ways, some tender, thoughtful and on occasion brutal.

It could be easy to say these are just issues for a certain demographic but how can that be when the demographic illustrated is such a wide swathe.  It is much broader than that, and not  limited to the specific representations of ethnicity, nationality, gender, location, historical period, detailed herein,  These are universal themes affecting all: such as identity, parental relationships, domestic abuse, disappointment and coming to terms with life in all its vagaries.

After the third story I started to look out for the interconnectedness of their lives as it was not always obvious (to me) at first glance.  I think this is one of the key aspects why Girl, Woman, Other worked for me.  Because I was able to see stories narrated by the character and then a sliver of information from the perspective of another, which added depth, weight and truth to the matter. I stopped being an unbiased observer but rather an invested researcher who challenged the narrative of the author of that story and kept on referencing back to others which had been read to obtain greater insight.

What I took from it

We are all shaped by our upbringing, experiences and those we’ve interacted with.  Thus, seeing the behaviour of these characters through the eyes of another, gave greater context, adding a richer dimension to each story on later reflection.   The impression I received was if we do not consider the lived experiences of others, their difficulties, then we fail to be considerate, accepting and kind.  We have chosen to assume rather than evaluate the reality before us, to make an assumption based on ignorance.  And what does that say about our judgement or us as people?

To sum up Girl, Woman, Other I loved it.

I thought it brilliantly illuminates the issues of life, mistakes, regrets and overcoming your past to create a better future. Not letting it – an opinion, a stereotype or assessment, even self-doubt – define or overwhelm the ability to function, to live your life.

How can you stop being who you inherently are whether that maybe black/biracial, female/other or poor/materially comfortable?  If you do so, are you you anymore? How well can you live with being constructed to please others and not yourself.

Girl, Woman, Other cleverly showed the complexity of people at their very best, worst and the everyday in-between.  Letting us, see this all through the lense of a loose friendship network was masterful.  The more you get to know someone through the eyes of another, the more you know them in detail and really understand them.  I liked some characters more than others, was irritated and amused with the rest, and considered that a win.

Bernardine Evaristo made me laugh, cry, mourn and reflect.  That is no mean feat and doesn’t happen often. Because this author can write. Her understanding of humans and ability to convey the complexity of human thought, behaviour and action, through a multifaceted, nuanced depiction of race and relationships in an accessible way, is a triumph.

5 Stars – It was Amazing