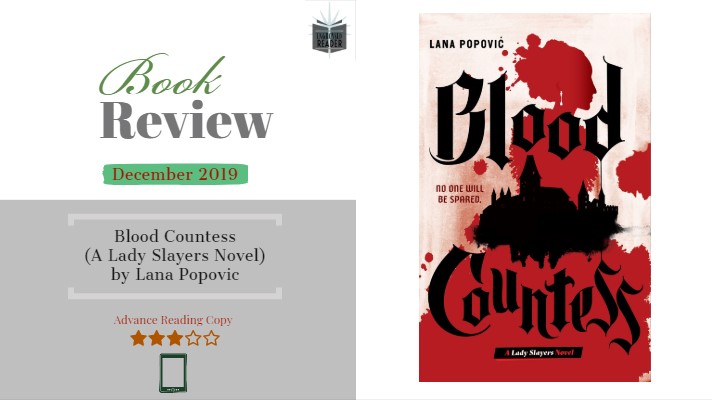 This review is spoiler ridden, so please avoid as there are no spoiler reveal boxes

When someone shows you who they are, believe them the first time.

The Maya Angelou quote sprung to mind quite soon after starting Blood Countess. You can avoid what you don’t like about a person and refuse to see it, but it is what it is.  The reality is there.  Anna refused to see Elizabeth for who she was until it was almost far too late.

In 17th century Hungary, Anna Darvulia has just begun working as a scullery maid for the young and glamorous Countess Elizabeth Báthory. When Elizabeth takes a liking to Anna, she’s vaulted to the dream role of chambermaid, a far cry from the filthy servants’ quarters below. She receives wages generous enough to provide for her family, and the Countess begins to groom Anna as her friend and confidante. It’s not long before Anna falls completely under the Countess’s spell—and the Countess takes full advantage. Isolated from her former friends, family, and fiancé, Anna realizes she’s not a friend but a prisoner of the increasingly cruel Elizabeth. Then come the murders, and Anna knows it’s only a matter of time before the Blood Countess turns on her, too. Goodreads

The reader is informed via the synopsis that this historical YA horror novel is based on the infamous real-life inspiration for Countess Dracula.  I not sure  if that matters other than as an inspiration for the plot. I haven’t verified that assertion, so wonder just how much of Elizabeth’s cruelty is based in fact or exaggerated for literary effect.

This story revolves around Anna who longs for a better life but lives in fear, hunger and poverty from an ill-mannered, brutish father.  Only her talent as a midwife, healer saves her from what she perceives as a poor lot in her life – marriage and ownership by a man, husband.  Despite in her case having a fairly modern relationship with a relatively well off suitor and friend.

Anna longs for more and this desire to spread her wings, do things differently brings her to the attention of the newly married Countess Elizabeth Báthory.  Once these two develop a relationship in earnest, it descends into blood-soaked misery for others and reveals an obsessive and debauched mindset

Was Elizabeth the catalyst for sadism or swayed firstly her husband then Anna?  Were they complicit, in awe of Elizabeth, the bon vivant, her beauty, bonhomie and social influence.

Anna was a let down in that she was set up and sold to me as being  smarter than the average girl in her village: articulate, knowledgeable  – knowing that she could want more for herself.  But ultimately,  she was as clueless as any other from her social class.  It took her a considerable amount of time to come to the realisation that love can not change someone. It takes more. And she was no match for Elizabeth’s  intellect, beauty or schemes from the very start.

When the depravity and torture becomes too hard to ignore, Anna realises that Elizabeth has no redemptive qualities whatsoever. She is truly and utterly debased, self-centred and self knowing.  She is happy being a collection of wants and met needs.  Happy in herself, Elizabeth hides the worst but not all of herself, until Anna is snared in the tangled web of attraction,  attention, and satiety.

Elizabeth was cunning and conniving. I enjoyed her immensely. She was real and unhinged.  Adept always at hiding her many faces, she is the consummate lady and formidable strategist.  Always one step ahead of those around her – delaying conception, ensnaring Anna, manipulating her peers.  She utilised the talents at her disposal and made a way for herself in the world. She is hedonistic and damaged.

I found that Blood Countess, rifts on a number of themes particularly women: the duality of women, Madonna and whore  and the limited opportunities offered to them. This was a tale about power, social class and ultimately the role of men and women.

Elizabeth’s husband Ferenc was one dimensional in that he was the bad guy until Elizabeth revealed him to be a man of his time – no better or worse than others in this period.  The reader like Anna were fed the subterfuge that  his loutish demeanor contributed, in fact drove Elizabeth’s worst instincts.

Peter, Anna’s devoted friend and would be suitor is referenced little in this book and truly I wonder what was the appeal of Anna, that he spurned all other eligible girls and was always available to be her rescuer .

Men in this book were authoritarian, driven by avarice and violent.  They are nonentities in relation to the women and manipulated by Elizabeth.

It reveals the chilling depth that one will go for love or even obligation; how we can enable and justify bad behaviour. She is less Anna the Cunning and more Anna the overwhelmed, out of her depth. It’s only when the mounting body count becomes too much to sidestep and it becomes untenably personal, that Anna allows her conscience to come to the forefront and turn into action.

I expected sinister, suspense and creepy and didn’t get it, instead, I got seduction, excess and multiple deaths. Yet that’s no bad thing. It was likable, an acceptable read.

At times I felt it was trying to out gore or horrify me but it never managed to take me there, to the place where I lived and breathed Elizabeth and prayed for her uncertain future.  Ultimately I was waiting and watching for a resolution, a voyeur rather than a participant.

In summary,  I liked it for the most part and only thought towards the end it lost its way slightly by tying up the majority of loose ends and leaving a few outstanding for a sequel.

My thanks to NetGalley, ABRAMS Kids and Amulet Books  for an ARC of this book in exchange for a candid review.