Book Review – A Bit Of A Stretch by Chris Atkins 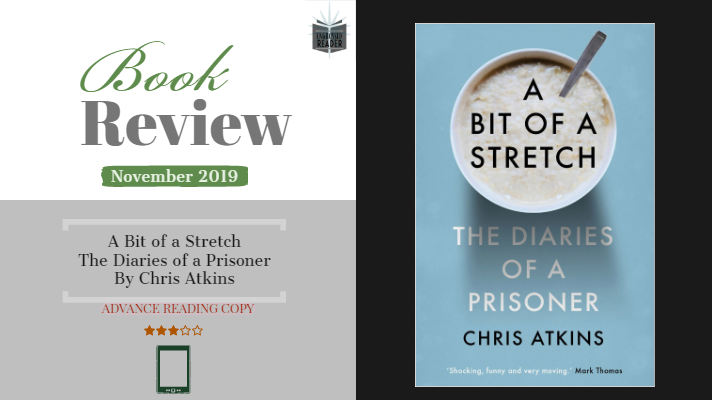 I shortlisted A Bit Of A Stretch for a few reason, firstly because of the cover – I vaguely remember the tv show Porridge.  My knowledge of prisons and the criminal justice system is limited to the media – newspapers, documentaries, etc so the opportunity to obtain a greater understanding and from a personal perspective was not to be missed.

Where can a tin of tuna buy you clean clothes? Which British education system struggles with 50% illiteracy? Where do teetotal Muslims attend AA meetings? Where is it easier to get ‘spice’ than paracetamol? Where does self-harm barely raise an eyebrow?

Welcome to Her Majesty’s Prison Service, a creaking and surreal world that has been left to rot for decades in the shadows of polite society. Like most people, documentary-maker Chris Atkins didn’t spend much time thinking about prisons. But after becoming embroiled in a dodgy scheme to fund his latest film, he was sent down for five years. His new home would be HMP Wandsworth, one of the oldest, largest, and most dysfunctional prisons in Europe.

Horrifying, moving, and darkly funny, this is the unvarnished depiction of what he found. With a cast of characters ranging from wily drug dealers to corrupt screws to senior officials bent on endless (and fruitless) reform, this is the reality behind the locked gates. Full of incredible and hilarious stories, A Bit of a Stretch reveals the true scale of our prison crisis and why it is costing us all. Goodreads summary

Chris Atkins, a documentary film maker was sentenced to 5 years for a tax evasion scheme used to fund one of his films.  A Bit Of A Stretch is his diary of the 9 months spent at HMP Wandsworth chronicling his induction to his transfer to an open prison.  It highlights the challenges he faces trying to assimilate to a new environment.  We are introduced to some very interesting characters and situations and it also illustrates the futility of processes and the mental health crisis that is at breaking point within the prison system. The book concludes with Chris Atkins sharing his recommendations for prison reform

At just the point when I asked the question, the author shared the details of why he was incarcerated and updated the reader throughout on the process, which made it clear that even after you are sentenced, it doesn’t end there.

A Bit Of A Stretch was Informative, insightful and oddly entertaining. The latter sits a tad uncomfortably, given the subject matter and the humorous moments. Indeed, as does, entire conversations and motivations of other prisoners.  However, if it’s an accurate reflection and recollection of what occurred then I can see why it’s been included in this way.

The format at times felt disjointed because of the diary format, additionally, the short introduction to a subject and then it being repeated multiple times again as a prevalent theme was a minor irritation.  However, what was powerful was clearly seeing the effects of prison legislation, ministerial incompetence and administrative inefficiency on an individual.

What stood out for me in particular was how prison mirrored life on the outside and how you were immediately disadvantaged by your race, social class and education.  It illustrated, no confirmed that it’s who and what you know that will give you an advantage in (most) situations.

Reading  A Bit Of A Stretch raised many questions for instance how could the author become a Listener in addition to the number of other positions of responsibility within four months?  Is that working the system to your advantage or essential because the system needs inmates to step up to these roles for it to function?

Finally, It would be useful within the kindle edition if the citations were footnotes and not endnotes, as it would make it far easier to read the references..

However, these points don’t distract from what was a fascinating read.