Album – We Are Not Your Kind 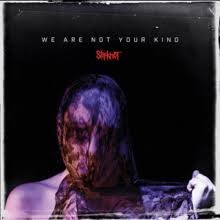 Slipknot – We Are Not Your Kind

We Are Not Your Kind is Slipknot’s 6th album. It’s a studio album rather than one of their live ones – which thinking about it I don’t think I’ve ever listened to .

I like that there are experimental, try new styles and don’t stay with the same sound.  I find the mix of low notes, growls, singing and screaming  satisfying.  Plus the drumming and percussion is epic.  And not to forget their masks.  They bring a lot of intensity and put a lot of effort into the brand which I appreciate.

Reading what I’ve just written it is as if it’s all style and no substance, yet that isn’t the case.

The topics they cover, the lyricism, the heaviness of emotion is tremendous.  Slipknot have articulated many of my own thought processes and sentiments.  They have taken me to places that I didn’t want to revisit and made it ok. The feelings of being overwhelmed, lost, angry or sad have been sung out.

I’ve already referenced We Are Not Your Kind in an earlier post as my album of the month, and how I’d been playing them on repeat. That hasn’t changed much.

So I’m a fan but not a dedicated one – I’m not up to speed with what their doing, personal life, touring, etc.  But will always take a listen to a new release as there is bound to be something that I will like .  And Slipknot are one of the few bands whose videos I’ll watch. Their strong visual style means at the very least the videos are interesting.

What do I like about it?  Too much to go into now.

But back to the album.  The stylistic and musical range is so wide, I’m sure there’s an entry point even for those who are not fans of metal. How can you not like one of these songs?  It’s unfeasible.

It’s difficult for me to choose a stand out track –  although no one as asked me  to – however there is always one or two songs that I get wrapped up in .  The fact that there are too many good songs on this album makes it almost impossible to narrow it down.

But if I had to it would be this:

Solway Firth – the riff, amazing.  It was great to see clips from The Boys in this video.  I’d watched this really cool comic book adaptation before seeing the video. This reminds me to check out the soundtrack which was excellent too.

Birth Of The Cruel – The weight of the drums at the beginning is something else. Not loving the video for this one as it’s crazy and headache inducing,  but that doesn’t distract from the song though.

Others in the running are Critical Darling, Nero Forte, A Liar’s Funeral, Spiders.  And that’s me stopping, otherwise, it will end up being the entire album.  Also don’t get me started on the lyrics, how profound and touching they are.

So in short – I like it alot, it’s perfect in many ways hence the 5 star rating.  The album isn’t a daily listen any more, although a couple of times a week I will have listened to my favourites on repeat for a while.

It was hard to keep this focused to just this album.  So do or don’t look forward to another post on Slipknot that will cover all previous albums.  It will give me a chance to go down memory lane and listen to 6 albums back to back.

I will make time for that.