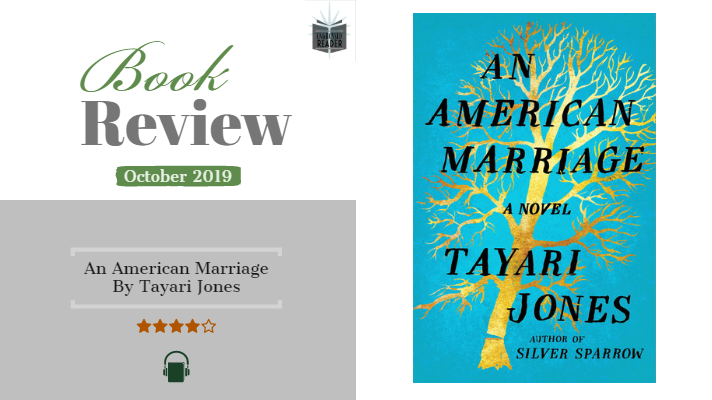 An American Marriage is emphatically about the injustice of wrongly incarcerated black males in America, however there are other prevailing themes threaded throughout, most notably marriage and the insidious power of secrets.

Newlyweds Celestial and Roy are the embodiment of both the American Dream and the New South. He is a young executive, and she is an artist on the brink of an exciting career. But as they settle into the routine of their life together, they are ripped apart by circumstances neither could have imagined. In this deft exploration of love, loyalty, race, justice, and both Black masculinity and Black womanhood in 21st century America, Jones achieves that most-elusive of all literary goals: the Great American Novel. Book blurb by Goodreads

I listened to the audiobook narrated by Sean Crisden and Elsa Davis and was blown away by their performance.  Can’t speak to the veracity of the accents but the power and diction were sublime. The author’s lyrical and vivid presentation is perfectly suited to a visual and audible performance.  Whilst listening in my mind’s eye I could visualise the landscape and scenes being played out.

Even though you know what’s coming – the big plot point –  it’s the journey – how she takes us there and the aftermath that is so well done.  And yet there’s more.  All the while knowing this bad event is about to happen, there is growing dread that there is more, maybe worse to come.  The unsettling tinge of  foreboding.

Secrets – how honest should you be in a relationship

Foreshadowing is carefully managed by the slow drip of secrets,  culminating in excruciating reveals – drawing Roy and Celestial further apart rather than binding them closer together.

It made me consider how honest you should be in a relationship and at what stage – getting to know you stage, casual dating, going steady or marriage?

From the first chapter I was already considering were Roy and Celestial right for each other and would they have stayed together if the wrongful imprisonment hadn’t occurred.

I started off not warming to Roy or even Celestial as their version of marriage seemed at odds with each other and with my own opinions.  That never really changed as the occurrence of incidents revealing them as people who were consistently  inconsiderate of their spouse and marriage i.e acted as if they were still single,was evident.

It made me think why are married? Why did they want to marry each other? And what benefit were they getting out of this relationship.

All these questions, made me examine the other examples of marriages within the book to compare and contrast.  Roy and Celestial’s parents both had loving marriages in spite of issues and I felt that’s where the issue lay.  Roy and Celestial were married, but did they love or like each other? Was that even possible when they didn’t know core parts of each other?  Or did that only become a problem because they faced adversity early on in their relationship.

We get a really good look at the impact that mothers and fathers have on their children and different models of parenting:is it presence, involvement or money.

An American Marriage is an exquisitely tender illustration of the complexity of marriage and family.

The format of current, past and then skipping a few months and years, together with the titbits of disclosure gives you a fuller understanding of the motivation and put characters into context. While you don’t like them any better you understand them more and accept that they are flawed.  Just like in real life, there is a tendency of people wanting to present their best selves to the world and tell others what they think others want to hear.

This is a book that had me thinking and wanting to talk about it and share.  I still have so much that I want to say, but will finish with a short shout out to my favourite character who was Roy Snr.  Everything he said was honest, measured and to the point.  He radiated integrity, through his actions you saw his caring, loving family orientated disposition.

Thank you Tayari Jones for an uncomfortable yet inspiring read.